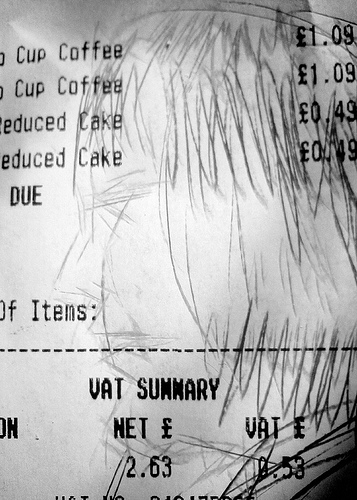 You may or may not realise it but you are presented with thermal printed products almost every single day – depending on how regularly you go out shopping of course.

It is one of the most popular printing techniques used by retailers with receipt printers, you might even have a piece of thermal print sitting in your pocket as you read this article!

This great inkless printing method has been around for decades in various forms and is still widely used today which is why we’re going to share the mechanics involved with direct thermal printing and how it gained its fame with a helping hand from technology pioneers like Nintendo.

There are two types of thermal printing – neither of which require the application of ink like an inkjet or lithographic printer. One method, known as thermal transfer printing, involves the use of a heat-sensitive ribbon to create an impression on paper like a heated typewriter. The other is named direct thermal printing.

Direct thermal printing involves the application of heat from a thermal printhead to substrate that has been coated with a solidified chemical mixture of a colourless dye and a matrix (Wikipedia).

To explain this print technique as clearly as possible we will describe the process of direct thermal printing within receipt printers.

In receipt printers the coated paper is loaded as a roll and fed through a slot that passes it between a rubber roller and the thermal head. The printhead contains many dots, similar to a dot matrix printer, which quickly heats specified areas of the paper as it passes over, using dot formations to produce letters and graphics.

A chemical reaction occurs within the paper’s coating between an acid (octadecylphosphonic acid) and the dye as the matrix reaches a temperature above melting point, producing a black colour.

This process happens so quickly that it is unnoticeable to the human eye, however, you can witness the effects of heat on thermo-sensitive paper yourself by running a blunt object across the face of a printed receipt – friction is created between the object and the paper, generating enough heat for the chemical reaction to occur and resulting in a black line.

The heat applied by a thermal printhead is focused in dotted patterns, which is why a receipt printer is able to produce readable text and graphics. If, however, a receipt is exposed to intense UV heat or other high temperatures that cause the reaction to occur then the readability of the printer-generated deteriorates – the main drawback of this print method.

We’ve already identified that thermal printing is commonly used in shop receipt printers, however, there are a few other uses for this type of print that you might not know about:

Nintendo’s Game Boy was one of the earliest gaming consoles that allowed users to print out graphics and text directly from gameplay using the Game Boy Printer. Released in 1998, this miniature thermal printer allowed console owners to print stills from later games, such as Pokemon, but it was primarily intended facilitate the Game Boy Camera which was released in the same year.

The combination of the Game Boy camera and printer allowed users to capture very basic dot matrix-style photos and print them onto thermo-sensitive stickers using the direct thermal printing method.

Here’s a video showing the Game Boy printer in action:

The print quality was very poor compared to current day standards, however, for 1998 this was an impressive system unlike any other that allowed people to snap and print on the go.

Other Uses of Thermal Printing

To summarise this explanation of direct thermal printing there are 5 key points to remember:

If you enjoyed this article and want to read about other printing methods that involve heat, have a read of our article on thermographic printing.