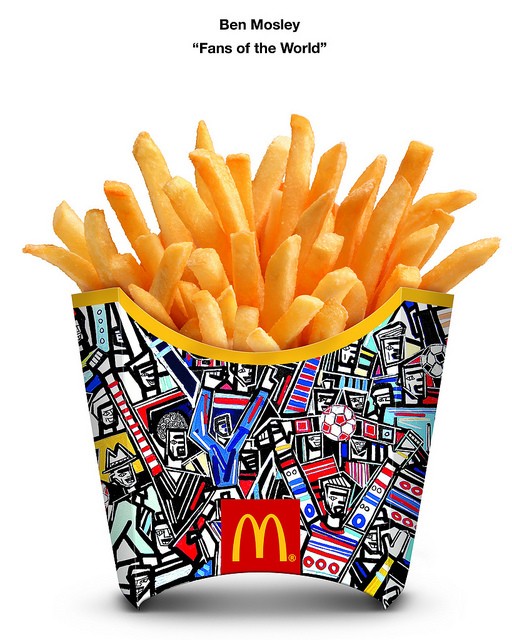 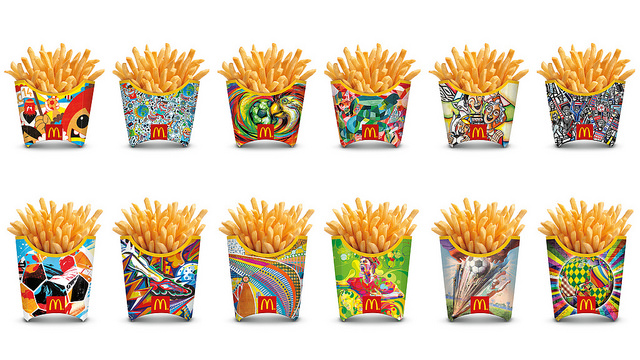 Starting next Monday, McDonald’s are changing the look of their iconic red and yellow French fries packaging globally with bold, new artwork to celebrate the upcoming FIFA World Cup 2014 football tournament in Brazil.

English expressionist and action painter Ben Mosley has provided one of the artwork pieces for the new specially-designed McDonald’s fries boxes, titled ‘Fans of the World’. Previously commissioned by Manchester United and Wembley Stadium, Ben describes himself as a “passionate sports fan” who loves Barnsley Football Club.

In addition, the redesigned fries boxes will be the key to ‘unlocking’ a new Augmented Reality (AR) game app that will reward customers with an engaging, virtual trick-shot football challenge. Created for McDonald’s in collaboration with Qualcomm Connected Experiences and augmented reality specialists Trigger, the new McDonald’s GOL! app will be available for most mobile Android/Apple smartphone or tablet devices on the Google Play and Apple App stores.

Customers just download the GOL! app and begin play as soon as they have their specially-designed McDonald’s fries packaging in-hand. It’s as easy as holding the screen of their mobile device up to the front of the box. As the device automatically recognises the artwork, a football pitch will appear in an augmented reality scene on the screen, with the fries box as the goal and other built-in objects as obstacles. The idea is to ‘kick’ the ball with the flick of a finger and divert or use obstacles to get the ball into the goal.

McDonald’s are one of the official sponsors of the FIFA World Cup 2014. 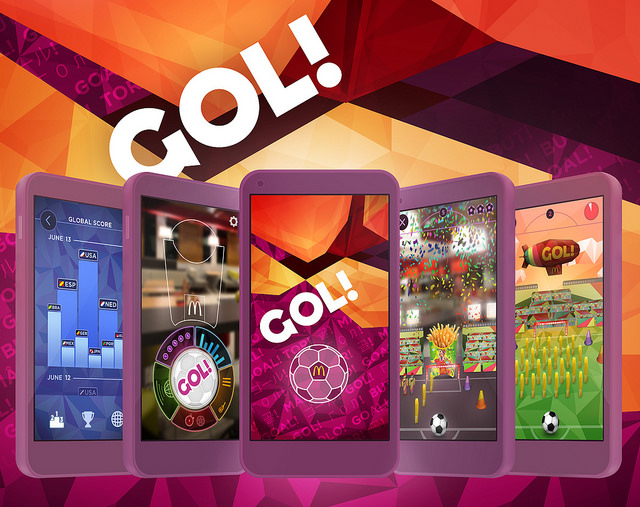 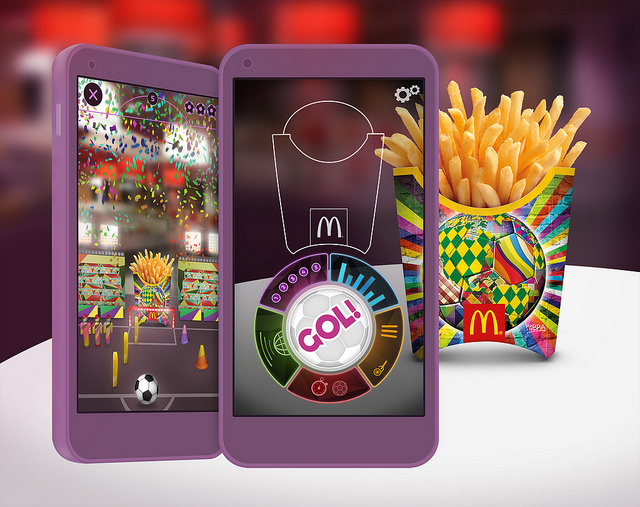 “This is the first time in brand history we’re changing the packaging design of one of our customers’ most favourite menu items on a global scale, and what better reason than to share in the excitement of one of the most prestigious sporting events in the world,” says Steve Easterbrook, senior executive VP and global chief brand officer at McDonald’s. “This is about bringing fun, innovative programming to our customers and celebrating our shared love of football. We’re excited to be able to do that through an engaging, interactive mobile experience, and of course with our world famous fries.”

But this isn’t the first time that McDonald’s have experimented with augmented reality for their marketing. Most recently, McDonald’s collaborated with advertising agency DDB and Trigger on an AR app for their Mr. Peabody & Sherman Happy Meal box to help encourage healthy eating for kids.