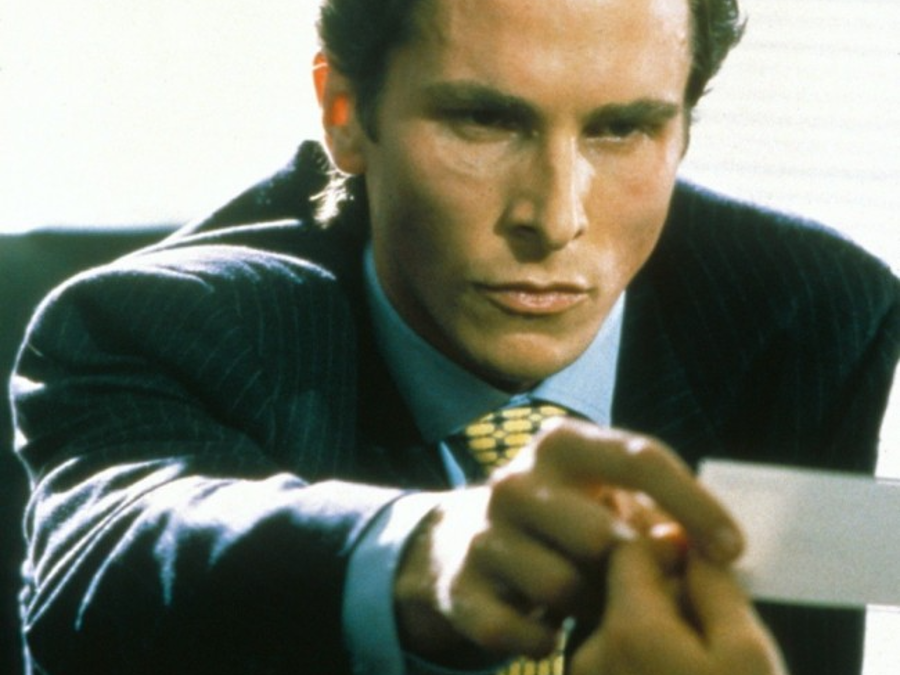 A well-rounded fictional character is one that fully inhabits their world. They often have an elaborate back-story that includes what role they serve in their society. So as long as they’re human beings or similar, living within two or three centuries of the present day, why shouldn’t they have personalised Business Cards?

It’s important to get it right though. Just as it is in the real world, some characters in the movies hit a home-run with their Business Cards, and some miss the mark. We take a look at some on-screen examples and decide what’s a HIT and what’s a MISS. 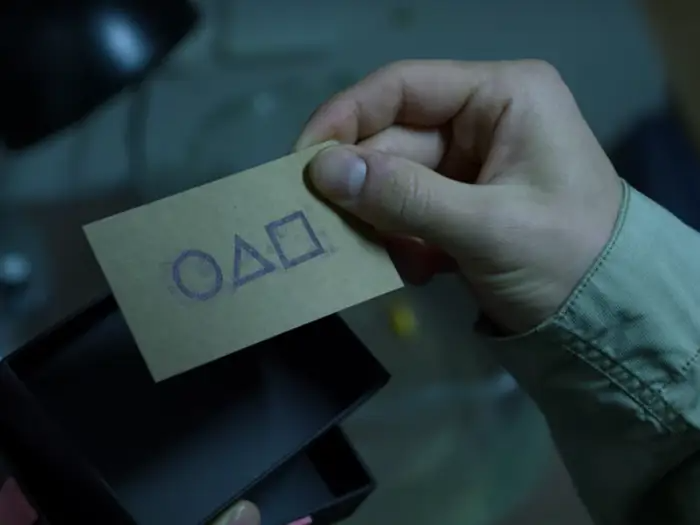 With its distinctive trio of shapes and promise of debt relief, the Squid Games Business Card sent a simple message, but one that was to have sinister consequences. Not only was the card successful within the story, attracting hordes of debt-laden hopefuls to sign up, but it also became an iconic prop in Netflix’s most successful global series ever. Regardless of the chilling outcome, you can’t deny that level of engagement! 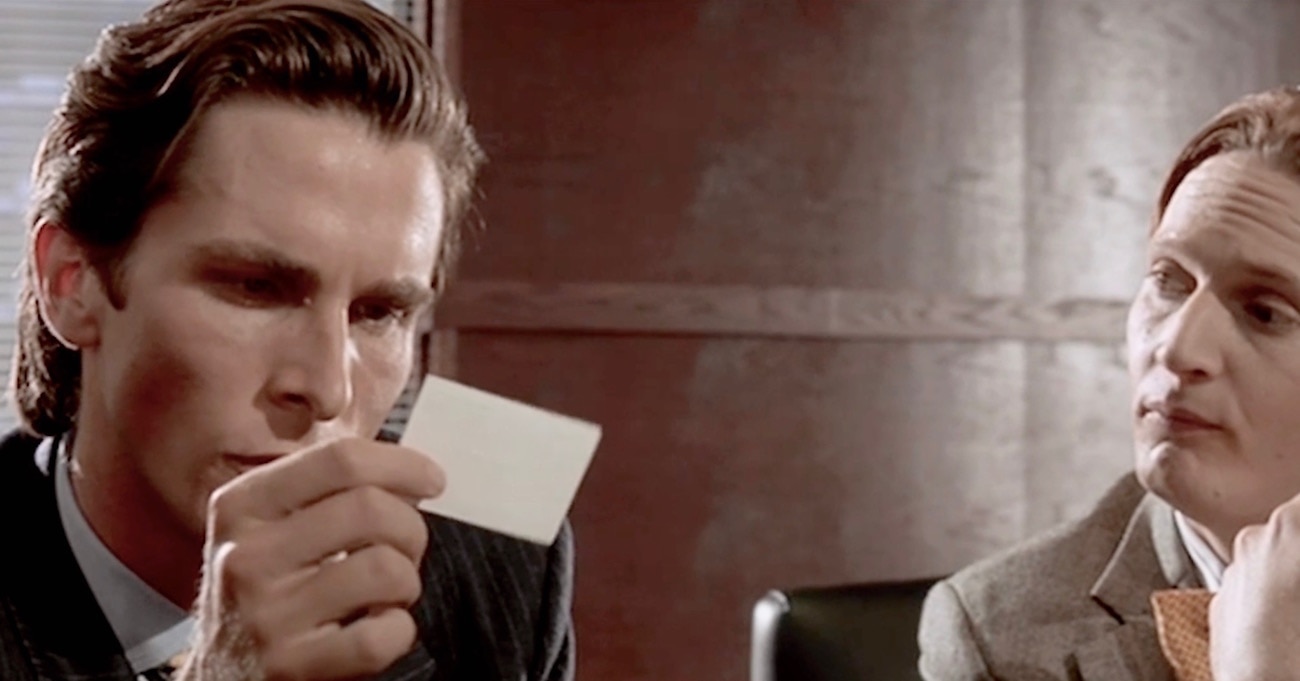 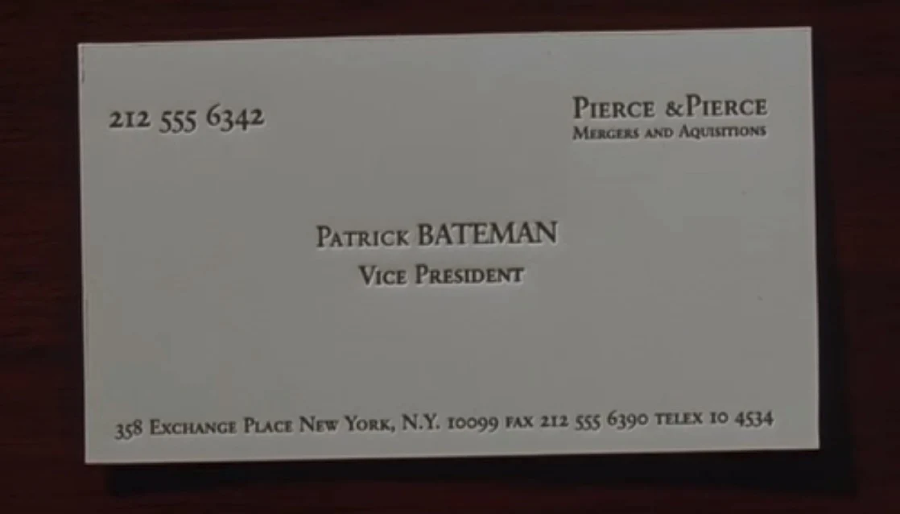 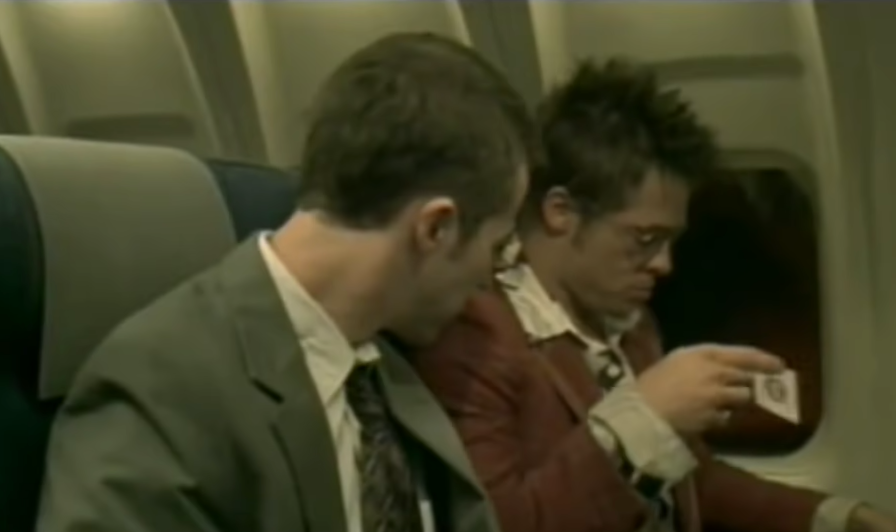 “You are not the contents of your wallet” proclaimed Tyler Durden, but he does a good job of summing up his cosmetics venture in this wallet-friendly Business Card. It’s got branding, USPs, imagery, clear contact details. The first rule of Business Cards? DO talk about your business. 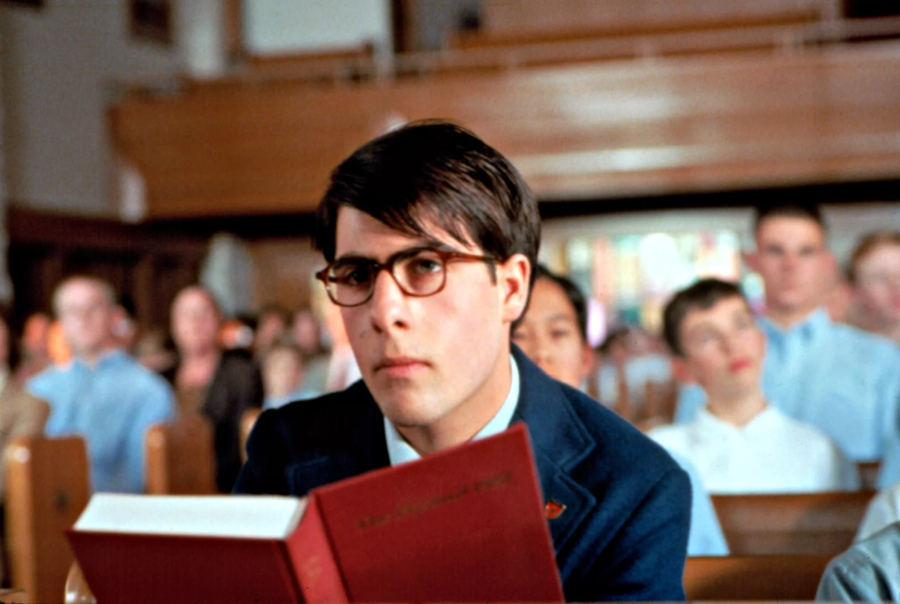 This early Wes Anderson classic follows Max Fischer, played by Jason Schwartzman,  as he endeavours to perpetuate his attendance at the titular Rushmore Academy. The very fact that this perennial highschooler has a Business Card says far more about the character than the text it features. Yet despite the meagre info, its simple clarity shines through.

When it comes to Business Cards, accuracy is key. It’s always worth proofreading your content after taking a break, or getting a colleague to check it for you. That goes for the fictional world too. You certainly don’t want to end up on moviemistakes.com like Tony Scott’s 1998 film, Enemy of the State, in which Will Smith’s character Robert Dean Clayton seems unsure of his own email address. 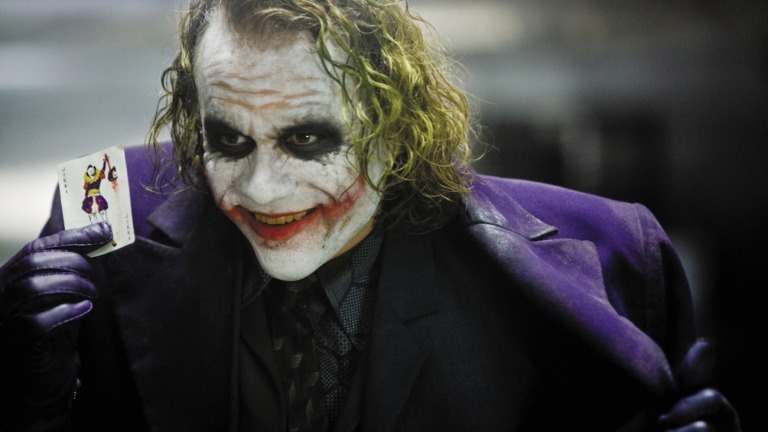 Zero points for effort. Contact details probably aren’t the priority when you’re looking to evade law enforcement. On the up-side, it’s instantly recognisable to anyone that sees it. But still, what about personalisation? Customisation? Unique design? This off the shelf solution not only lacks individuality, but also spoils a set of playing cards. Sorry Joker, but this one fails to land. 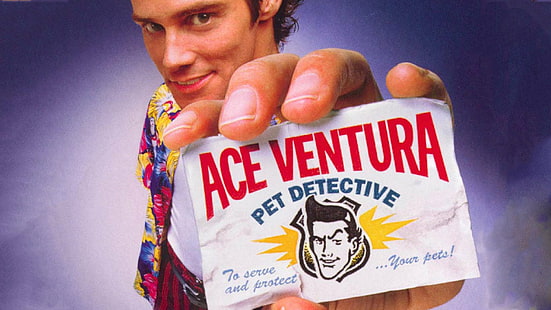 Eye-catching, illustrative, colourful; this card is a bold and accurate representation of Mr Ventura’s services. Contact details are absent from the front-facing of the card, so we have to hope they’re featured on the reverse. Beyond a banging Business Card, though, Ace Ventura hasn’t aged well. Many of those involved in the making of the film have since expressed regret at its portrayal of transgender people. 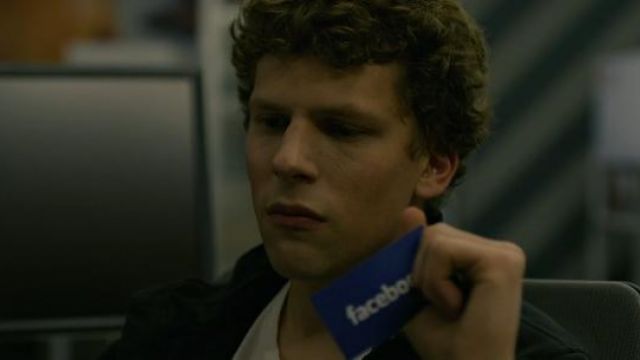 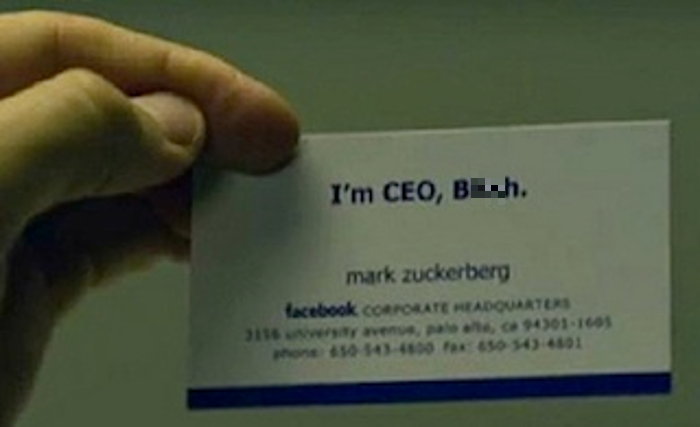 It’s good to know that even the king of online networking knows the value of a Business Card. Such a shame he couldn’t keep it classy. Sadly, the ‘joke’ on the card, which the real life Mark Zuckerberg once carried, pretty much confirms what you already suspected about the Facebook founder’s sense of humour and social skills.

Liz Hurley’s infernal character in Bedazzled doesn’t mess about. This is just the kind of self-confidence that Zuckerberg’s card aims for and misses. And while the Dark One’s professional ethics may occasionally dip below those of the social media mogul, her Business Card game is definitely more righteous. 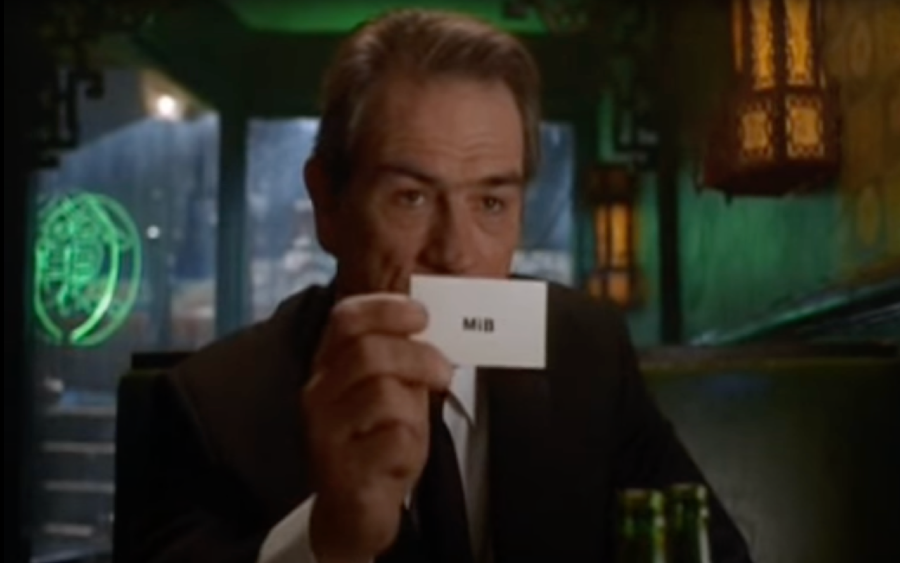 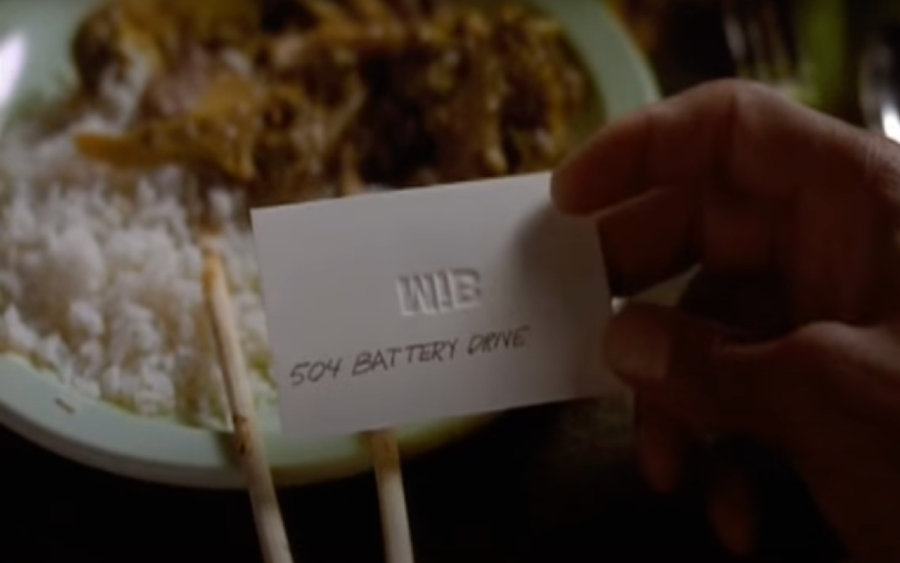 Continuing the minimalist theme, Agent K in Men in Black drops this spartan effort on Will Smith’s James over a cheeky Chinese. Whereas we all know where the Devil lives (see above, or should we say below?), K has had to handwrite an address on this occasion. While adding a personal touch is a great idea, doing so as an after-thought isn’t the way to do it. Furthermore, the card only features the initials of his organisation, and doesn’t state his name at all. You have to wonder why he’s bothered with Business Cards at all! 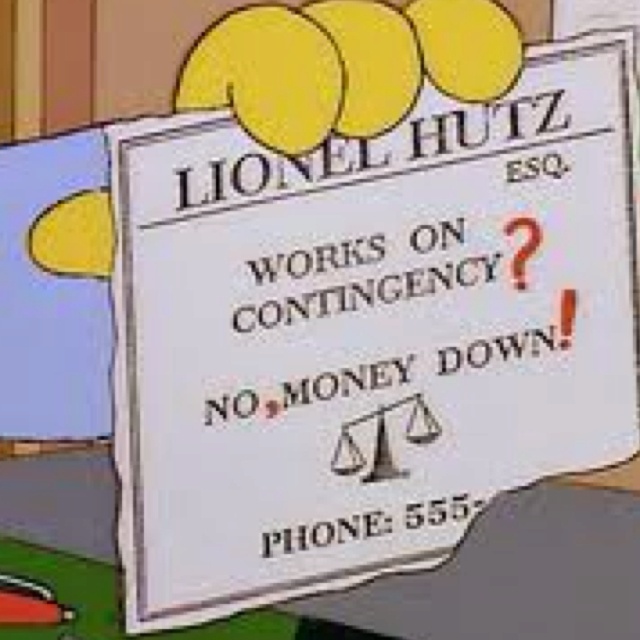 In common with Agent K, Lionel Hutz, hapless lawyer in The Simpsons, has also taken a pen to his Business Card. In the case of Lionel Hutz Vs. the Business Card, a sprinkling of punctuation entirely changes the meaning of his message. As well as demanding money up front, the card also appears to be dog-eared around the edges and missing one corner. Objection! 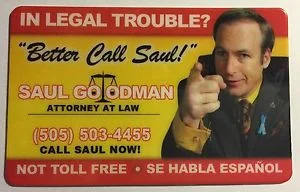 Keeping things legal, we move on to attorney Jimmy McGill, a.k.a Saul Goodman. This certainly isn’t the most tasteful or beautifully designed card we’ve ever seen, but it’s got a lot of undeniably powerful attributes working for it. It couldn’t be clearer what service is being offered here. The image is engaging, with Mr Goodman adopting that Lord Kitchener pose. And of course, most effective of all is that potent and memorable tagline: Better Call Saul! 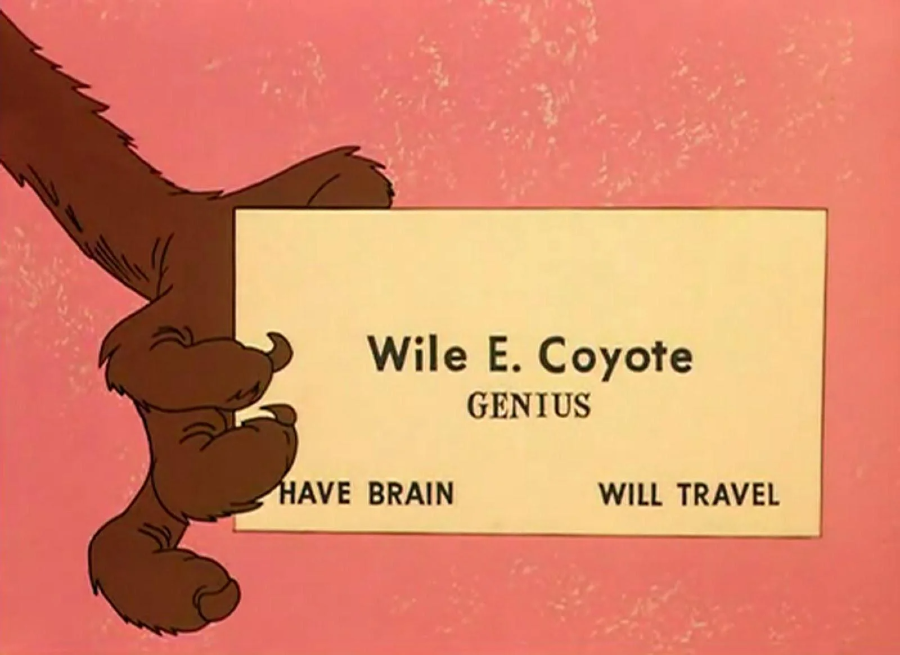 The erstwhile antagonist in this long-running cartoon is a coyote, a carnivorous canine native to North America. While they do have brains, they’re somewhat smaller than those of wolves, and the species is not known to migrate – facts that would seem to undermine claims made on Mr Coyote’s Business Card. What’s more, he neglects to feature any specific information or contact details. The acme of foolishness. 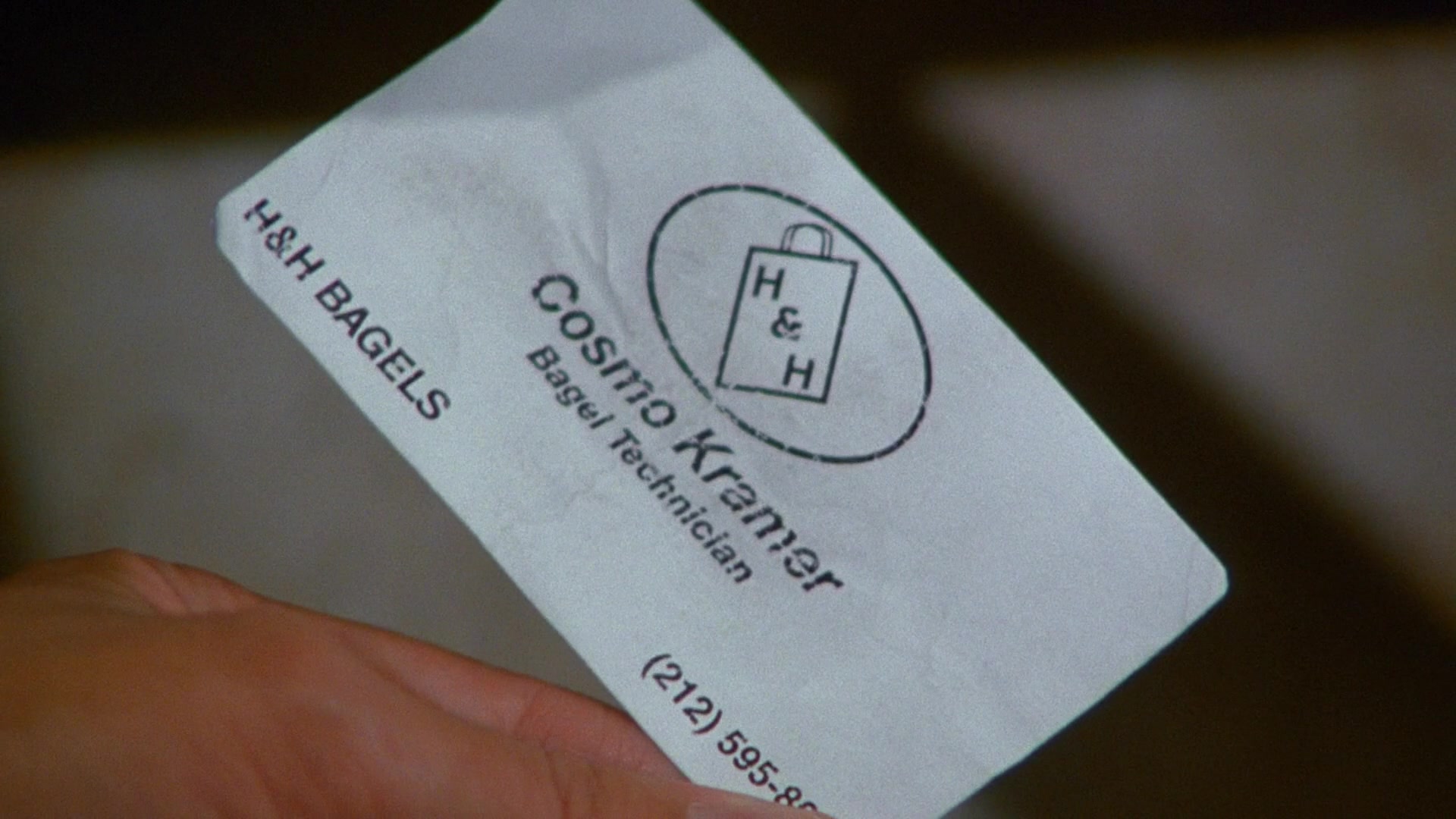 Jerry Seinfeld’s boundary-bursting buddy has a Business Card that manages to be no-nonsense and all-nonsense at the same time. Foreshadowing 21st century job titles, Cosmo Kramer self-identifies as a ‘bagel technician’, a position you could quite easily imagine advertised right now at indeed.com. Trailblazing.

We hope you’ve enjoyed our round up of on-screen Business Cards. We’ve seen that some fictional folks can exercise artistic licence when it comes to mundane details like business particulars and contact info. Back in the real world, we have a duty to include such things, but there’s still plenty of room for creativity. Check out our Business Card Templates, our Business Card Size Guide and our free-to-use Business Card Designs for help in creating your own unique design.