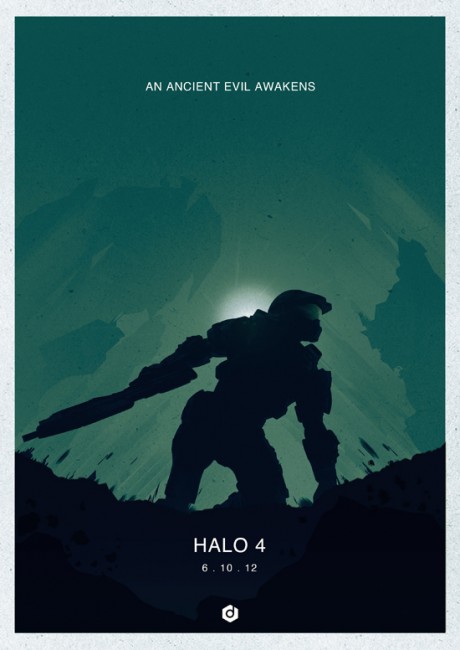 At midnight tonight, thousands of fans around the world will be queuing up to buy Halo 4 – the latest instalment in Microsoft’s popular video game series. In the meantime, here’s some insanely great Halo poster artwork to enjoy before play time finally begins…

Forget about the latest James Bond film, Halo 4 on Xbox 360 is poised to be THE biggest entertainment premiere of the year to date. Once described as Star Wars for the Xbox generation, this popular sci-fi video gaming franchise has already sold over 46 million copies worldwide and generated more than $3 billion in sales. Although Halo’s original creator Bungie handed the development of Halo 4 over to 343 Industries, this sequel continues the story of the series’ iconic kick-ass hero, Master Chief, as he returns to confront his destiny and face an ancient evil that threatens the fate of the entire universe.

But beyond the inevitable hype being generated for today’s game launch, it’s easy to see why the Halo story and hero have spawned so much artwork from its creators and fans alike. Here are 10 awesome Halo posters in Solopress’ very own Design Achievements hit list: 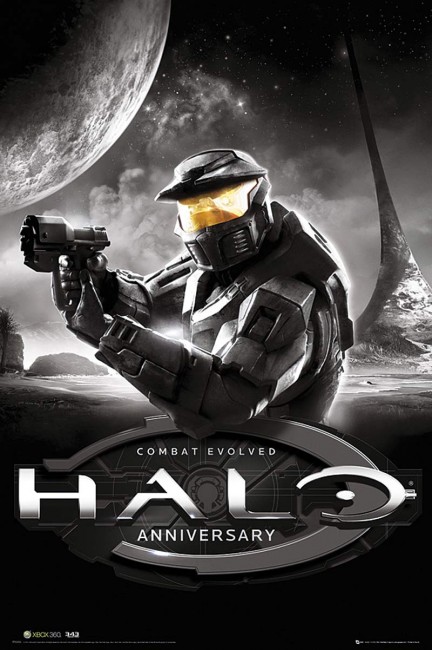 Halo trivia:
The Halo: Combat Evolved Anniversary edition, released on the 10th anniversary of the original game’s release, is the first Halo game to include support for Microsoft’s Kinect controller and 3D TVs. 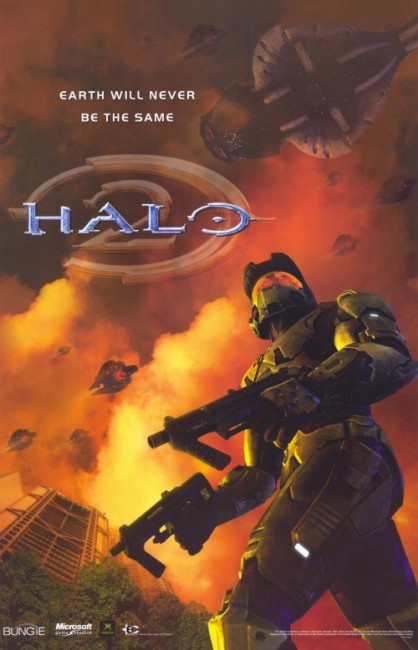 Halo trivia:
Halo 2 was the most popular multiplayer game on the Xbox LIVE online gaming service until the release of Gears of War. 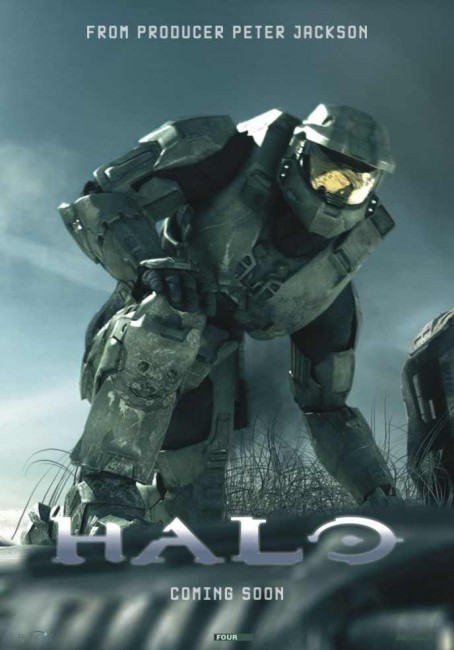 Despite this poster tease, the much anticipated Halo movie, written by Alex Garland (28 Days Later, The Beach) and co-produced by Peter Jackson (The Lord of the Rings), never saw the light of day.

Halo trivia:
Wired magazine published an excellent in-depth report earlier this year on ‘Why the Halo movie failed to launch’. 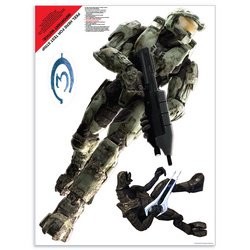 While they’re not strictly posters per se, Gamer Graffix produced a brilliant series of giant wall stickers to coincide with the release of Halo 3. You can still hunt them down on the likes of Amazon and eBay – try searching for “Halo 3 wall graffix” or similar phrases.

Halo trivia:
More than 1 million people had played Halo 3 on Xbox LIVE within the first 24 hours of the game’s release in September 2007. 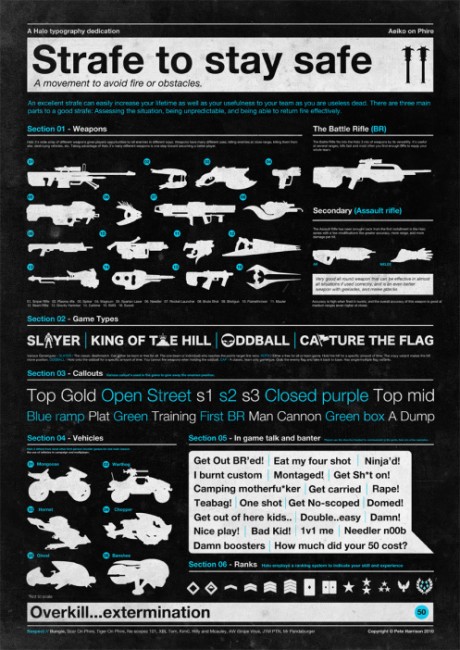 Strafe to Stay Safe, a typographic dedication to Halo, features references not only to the game’s weapons and vehicles, but also the banter and slang words used by gamers themselves. Designed by Pete Harrison and printed on 170gsm silk paper, this A3 poster is available to purchase online from FunkRush for £5.

Halo trivia:
Halo 3 is one of the games included in Tony Mott’s 1001 Video Games You Must Play Before You Die book.

5. Bros to the Close 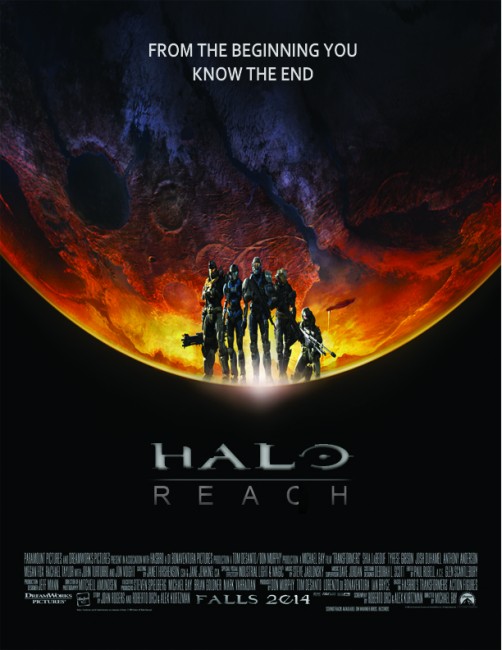 This piece of fan-made art by Nicholas Agnew is a lobby sized poster advertising an imagined movie based off the hit videogame Halo: Reach. The tagline “From the beginning you know the end” was a slogan used by Bungie and Microsoft to advertise the game. 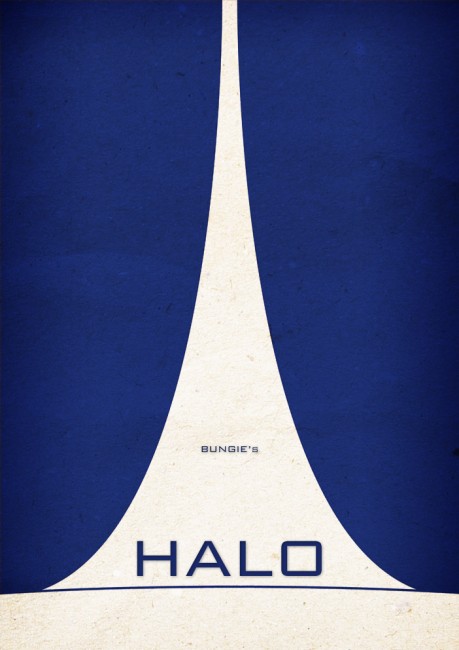 French designer Boris Lechaftois has created a set of simply stunning minimalist posters based on blockbuster video game franchises such as BioShock, Gears of War, Guitar Hero and Halo.

Halo trivia:
The Halo theme tune can be downloaded for play in Guitar Hero 3: Legends of Rock.

3. No One Left Behind 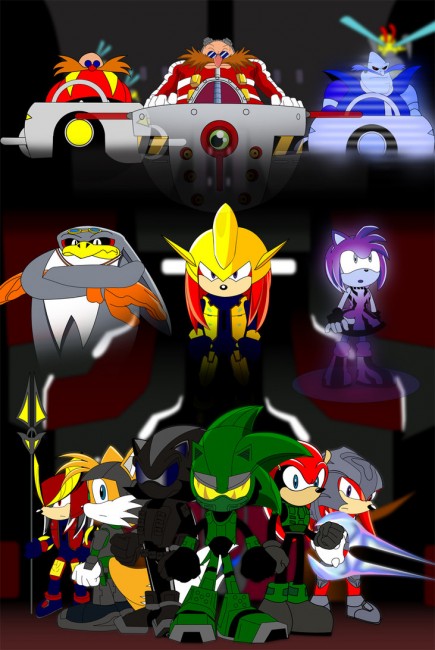 TheWax created this tongue-in-cheek poster to help promote the Sonic Halo video – an utterly fantastic mash-up of the opening sequence of Halo 2, remade with Sonic the Hedgehog characters. 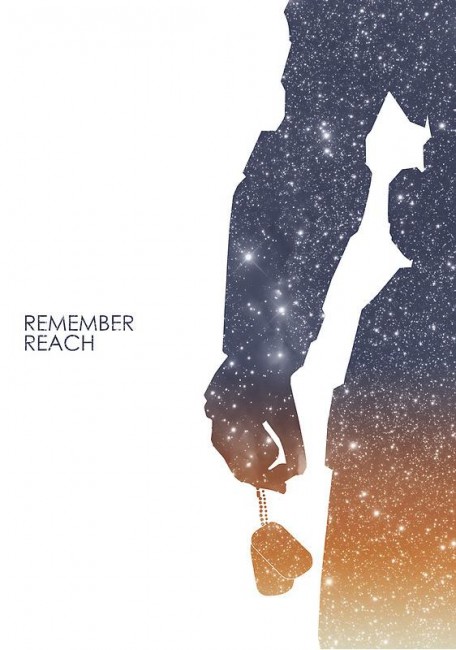 “I like the Halo 4 video game poster by Archymedius, purely for the simplicity of it. Another one I like is the Halo Combat Evolved Anniversary poster. For someone who does not know anything about the game it gives a better insight to what the game involves and includes. Use of the black and white with just a splash of colour has a far more dramatic feel,” says Julie Simpkins, one of the professional graphic designers at Solopress.com’s in-house design studio. “However, I’m not so keen on the Halo Strafe to Stay Safe poster only because I think it looks a bit busy.”

There will be more than 350 midnight openings for Halo 4 taking place the length and breadth of the UK, with the flagship launch taking place at GAME’s store in the Westfield Stratford shopping mall in London. Fans will have the opportunity to get early hands-on time with the game, win coveted Halo merchandise and prizes, see the Master Chief in person, take photos with a replica Warthog vehicle, meet The Gadget Show’s Jason Bradbury, and sample Mountain Dew’s Halo 4 themed ‘Game Fuel’ drink and the exclusive Halo 4-themed pizza from Pizza Hut. London will also host a spectacular Halo 4 PR stunt down the River Thames from Greenwich to Tower Bridge this evening – be there no later than 7.30pm if you don’t want to miss out on any of the action.

Gamers can follow all of tonight’s promotional activities across the UK by checking out the official Xbox UK fan page on Facebook and using the #Halo4UK hashtag on Twitter.

Measuring 50 feet in diameter and weighing over three tons, Microsoft claims the Halo 4 Glyph symbol is one of the largest and brightest structures to ever fly over a capital city. 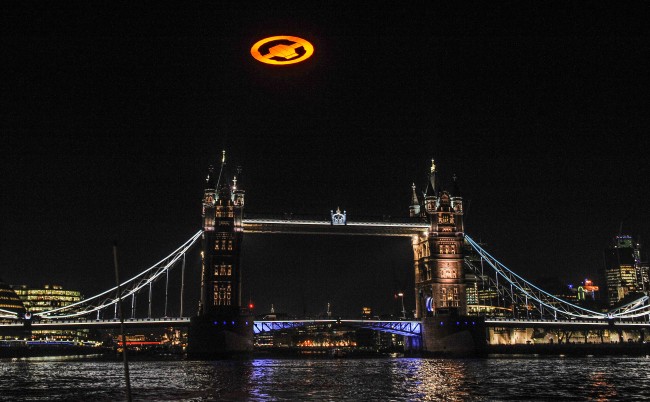 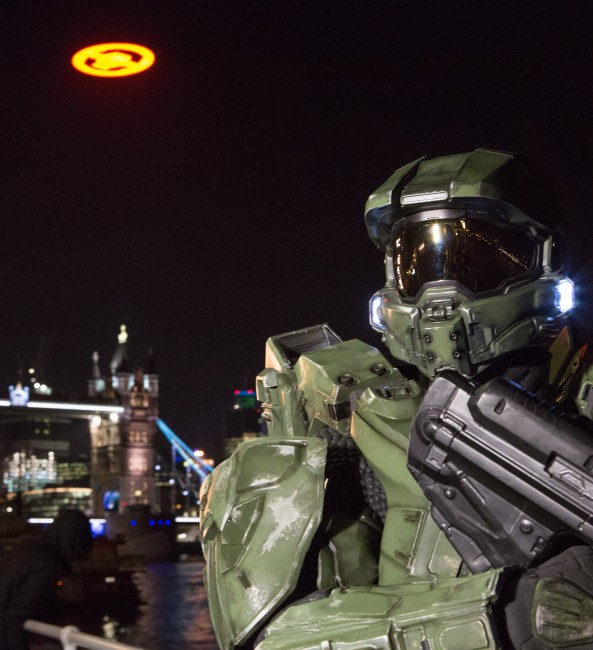