Button Badges, also known as Pin Badges, have a long and rich history in UK culture. To mark the introduction of Button Badges to Solopress’ huge range of promotional print, we pin down the history of Badges, from Victorian times to the Victoria Line.

The birth of the Badge

The Button Badge as we know it today first came about in the late nineteenth century. Cast or stamped metal and enamel brooches had existed previously, but they took significant skill, time and expense to produce. Button badges on the other hand got their name because they were made in a similar way, and by the same manufacturers, as cloth covered buttons. 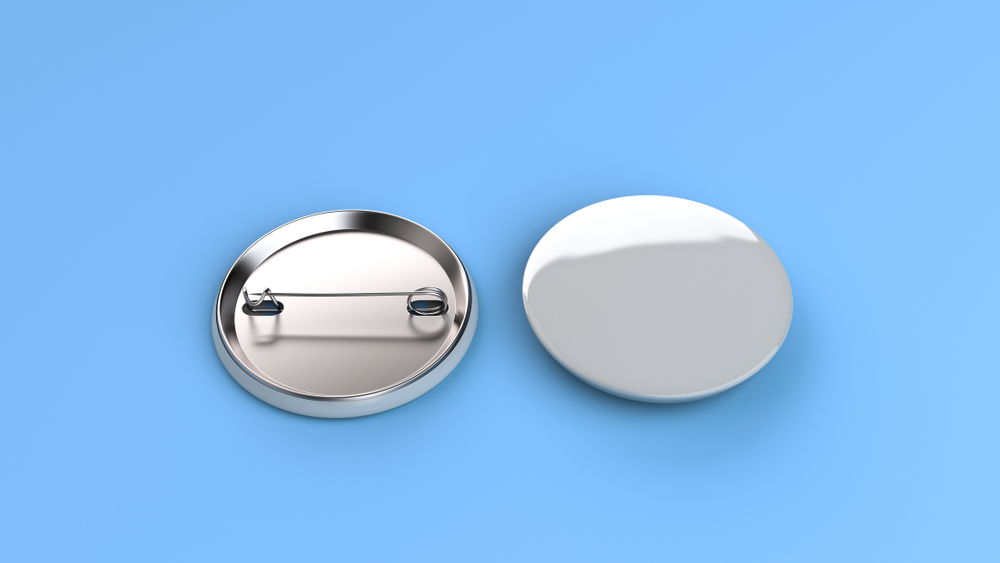 In 1894 and 1896, a US company called Whitehead & Hoag Co. filed patents for a ‘Badge Pin or button’ that consisted of a design printed on paper, pressed on to a metal backing and protected by a clear cellulose film coating. A metal ring held the assembly in place and a pin on the rear secured the Badge to the wearer’s clothing. This design persists to this day with slight variations in materials and design. It’s this type of Badge that Solopress offers in Round, Square and Rectangle options.

In the same year that the second patent was filed, Queen Victoria marked 60 years on the throne, and diamond jubilee Badges became popular throughout the British Empire. There followed a spate of popular Badges in Britain, both in support of the Empire during the Boer War, and in resistance to it during the campaign for Indian Independence, led by Mahatma Gandhi.

During World War II, pin Badges were used as a way for people to show their support for the war effort. Many pin Badges featured patriotic slogans or imagery, and were worn by both men and women as a way to demonstrate loyalty to their country.

In the 1960s, pin Badges became a popular accessory among the youth counterculture. The rise of the hippy movement saw an increase in the use of pin Badges as a way for young people to express their individuality and nonconformity. Many pin Badges from this era featured peace symbols, flowers, and other symbols of the counterculture. The CND Badge had been devised in 1958 by designer, artist and pacifist Gerard Holtom. The design, based on a figure expressing the letters ‘N’ and ‘D’ using semaphore, became adopted and adapted by the hippy movement on placards, posters, clothing, and of course Button Badges.

It also was during the 60s that a Button Badge inadvertently invented the emoji. According to this comprehensive history, the story starts in 1963, when the State Mutual Life Assurance Company in Massachusetts was looking for an upbeat symbol to improve morale among employees. They employed a graphic designer called Harvey Ball, whose solution was a circular pin Badge featuring two oval eyes and a beaming smile depicted in black on a yellow background. The ‘Smiley’ was born, spawning not only pin Badges, but Stickers, Posters, T-shirts and in time, the most commonly used emoji on the globe.

The punk, new wave and two tone ska movements of the 1970s and 1980s also made use of pin Badges as a form of self-expression. Punk pin Badges often featured bold, anti-establishment messages and imagery, and were worn as a way to make a statement and defy societal norms. 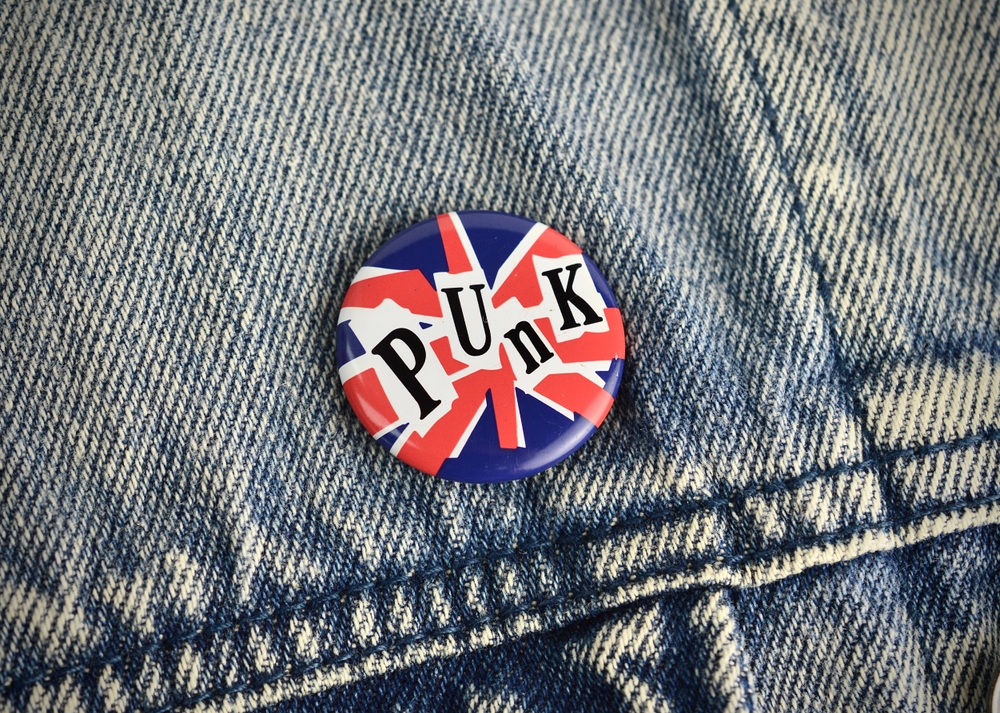 The character Rik (played by Rik Mayall) in the groundbreaking 80s comedy ‘The Young Ones’ habitually wore a bevy of slogan-laden Button Badges.One diligent fan even went as far as to reproduce Rik’s collection in its entirety.

Among Rik’s haul were Badges supporting both the Labour Party and the SDP Liberal Alliance, as well as various nuclear disarmament, anti-apartheid, pro-revolution message, and, somewhat incongruously, a Blue Peter Badge. This satirical take on Button Badges is a reflection of their popularity as a means of self-expression during the Thatcher years and the late Cold War era.

In the 1990s, however, things could only get better! The rave scene embraced the use of pin Badges, and the “Smiley’ was back, this time as a way to show one’s membership of the Acid House subculture. Rave pin Badges often featured bright, neon colours and psychedelic imagery, and were worn as a way to identify oneself as part of the posse.

Pin Badges graced the lapels of the Brit Pop stars of the nineties, too. They barely took a break before they were back again during the new-wave Punk revival of the early 2000s spearheaded by the Strokes and The Libertines. 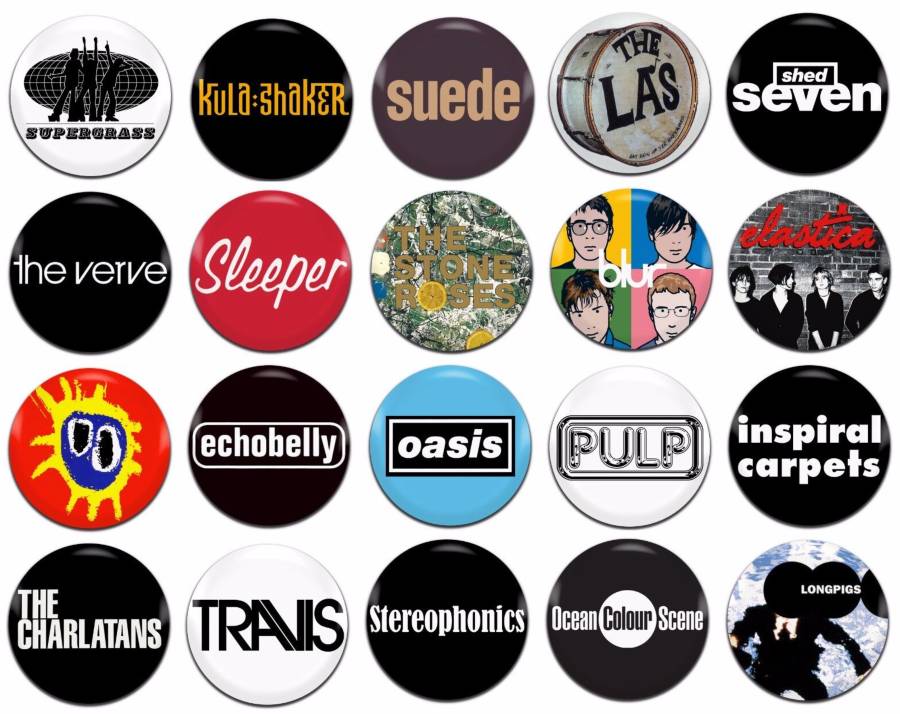 Movies and literature saw their fare share too. The use and significance of pin Badges is as elaborate as you would expect, for example, in the wizarding world of Harry Potter. Both the books and films are alive with references to Badges that help define characters and further the plot.

Pin Badges have also been used in politics as a way for politicians and political parties to promote their message and gain support. Many political pin Badges feature the image of a candidate or the symbol of a political party, and are worn by supporters as a way to show their alignment with a particular candidate or party. Some pin Badges also feature a slogan, such as Donald Trump’s infamous “Make America Great Again” which was countered by Hilary Clinton’s “I’m With Her” line in the 2016 U.S presidential campaign, and Joe Biden’s “Build Back Better” in 2020.

Back in the UK, the local elections coming up on the 4th of May should prove interesting in a number ways. Will the electorate punish the Tory Government? Has Starmer failed to inspire the left? Do the Lib Dems still have the clout to capitalise on the chaos? Whatever the outcome, you can bet we’ll see plenty of Party Political Badges on TV and at the Polling Stations.

Londoners who travel on tubes and buses will be familiar with TFL’s Baby On Board pin Badge. These badges were introduced in 2005 to help fellow passengers to be aware of the pregnant women on board who might be in need of a seat. The Princess of Wales was even photographed wearing one of the badges when she was pregnant with Prince George. The badges often crop up on eBay, but don’t be fooled! They’re available free of charge from TFL. 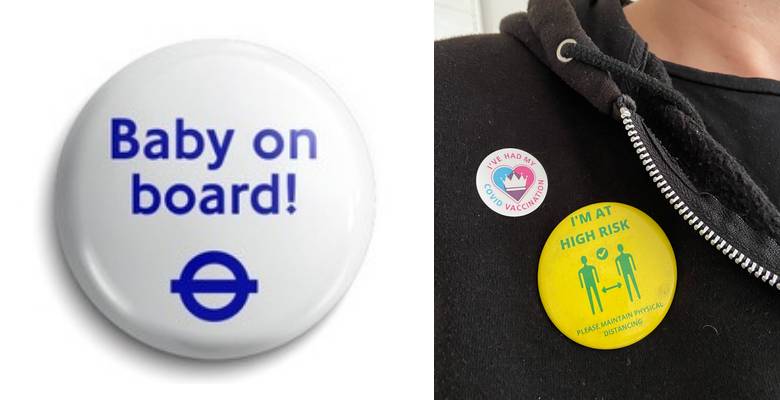 Button Badges have often been embraced by other groups wishing to make a condition known to those around them. For example, wearing a badge that declares you’re in a high risk category for infection allows others the opportunity to act considerately, without the need to address the subject with them directly.

Today, pin Badges continue to be a popular accessory among people of all ages. From their invention in the late 19th century to their use in WWII, the 1960s counterculture, punk and rave movements, and present day, pin Badges have been an important way for people to express their beliefs, affiliations and individuality. Pin Badges are used as promotional items by companies, organisations, and bands, and you can get in on the action with your own custom printed Badges.