Home Print Inspiration The most shocking anti-smoking posters ever made 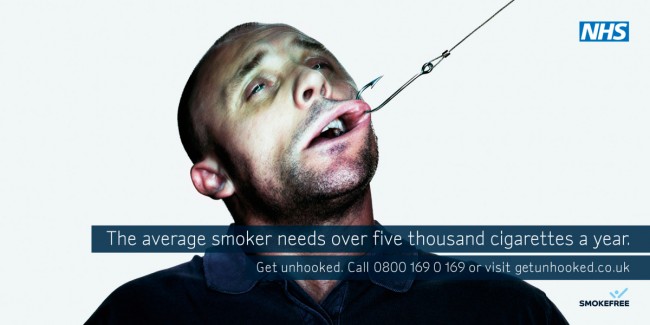 In the first in our new series of Design Insight blog articles, Solopress examine the most shocking anti-smoking posters ever made…

How are you coping now that we’re just over half-way through Stoptober, this month’s NHS backed challenge to quit smoking? Hang on in there and don’t give into the temptation of tobacco or your need for nicotine, because medical research shows that people who initially stop smoking for 28 days are a massive 5 times more likely to stay smoke free in the long-term. It’s a terrifying statistic that smoking accounts for over 100,000 deaths in the UK alone – and half of all long-term smokers will die prematurely from a smoking disease.

Does extreme or disturbing advertising also help people to stop smoking? Here’s our pick of the 5 most shocking anti-smoking posters of all time:

This controversial NHS campaign from 2007 – showing images of smokers literally ‘hooked’ on fish hooks by their addiction to smoking – featured on TV, billboards, newspapers, magazines, online adverts and elsewhere. While the poster adverts stayed with the raw imagery, the TV ads also showed a positive side, with the smokers eventually able to unhook themselves from their addictive habit. It was one of the most famous advertising campaigns during the entire year, attracting a whopping 90% awareness among smokers and the highest ever volume of response from any anti-smoking campaign previously run by the Department of Health. That probably helps explain why the Advertising Standards Authority also received 774 complaints about its distressing and offensive content. The ASA upheld part of the complaint and banned the posters near schools as they were deemed unsuitable for viewing by young children. Nevertheless, the NHS had the last laugh. As well as the campaign’s phenomenal success amongst its target audience, “Hooked” went on to win Marketing Week’s Best Campaign of the Year award in 2008.

Roughly translated as “smoking is to be the slave of tobacco”, these provocative anti-smoking posters – with the obvious sexual connotation of a teenage boy and girl performing oral sex on an older man – caused quite an uproar in 2010. Shown in bars, clubs and newspapers across France, the ads were produced on behalf of Les Droits des Non-Fumeurs (The Rights of Non-Smokers) campaign group. The DNF campaign’s president, Gérard Audureau, was quoted in The Independent newspaper as saying that young people think that they are immortal, and the fear of sexual exploitation worries them far more than illness. At the time, other French campaigners such as feminist pressure group Chiennes de Garde (Guard Bitches) vehemently disagreed with the use of images implying underage sex, even though the adverts were on behalf of a good cause like anti-smoking. While these are striking poster artwork, created by the French BDDP et Fils ad agency, it’s difficult for most of us to make the jump between oral sex and smoking. 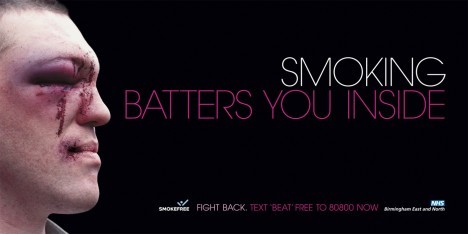 Aimed at men who smoke, the Fight Back campaign was launched by NHS Birmingham East and North in 2009. It featured hard hitting images of bloodied, beaten up men with taglines like “Smoking. GBH to your Insides” and “Cigarettes attack you. But in ways you don’t always see”. Posters and leaflets were seen and distributed at shopping centres, match days at Aston Villa and Birmingham City football clubs, and more than 900 other local venues. These were backed up by a short video, made by celebrity photographer Rankin and co-director Chris Cottam, which was posted on YouTube. “People have been seeing stop smoking ads all their lives and everyone knows it’s bad for them. It’s old news. Unless we give people a new perspective on it, they’re not going to take any notice,” explains Joanna Mawtus, creative director of Dr Foster, the company behind the ads. “We think this idea does that. It’s quite shocking, but then so is the damage smoking causes.” As a result of this award-winning campaign, the rate of people quitting smoking in the city increased by an incredible 67%. 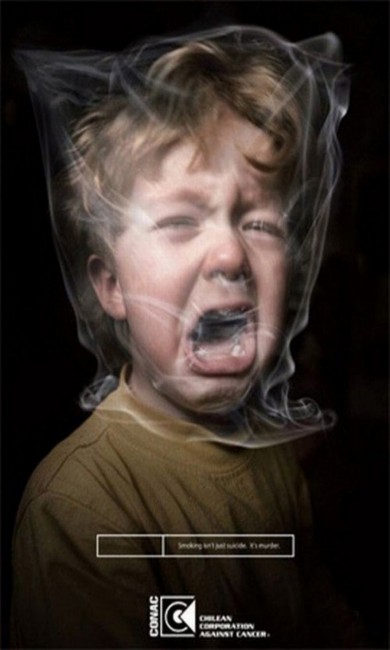 The simply titled “Brown” was part of 2008’s anti-smoking campaign by CONAC (Chilean Corporation Against Cancer) that showed images of children in distress, in an attempt to warn people about the dangers of passive smoking. Its tagline reads: “Smoking isn’t just suicide. It’s murder.” The advertising agency Draft FCB took no prisoners with these ads, the imagery is brutal. Although some viewers have observed that the child looks like he is throwing a tantrum, not suffocating from smoke. What do you think? 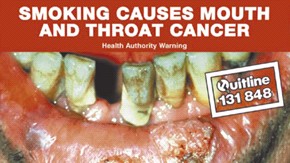 As the most extreme and disturbing photograph in our gruesome selection of anti-smoking shockers, we’ve deliberately reduced the size of this ‘Smoking Causes Mouth and Throat Cancer’ ad for you. The Australian government started placing graphic health warnings like this one, along with a Quitline telephone number, on the cigarette packs themselves in 2006. This upsetting photo made many smokers, and non-smokers, think about the possibility of getting mouth and throat cancer. It’s easy to see why it worked. Carrying on smoking and your mouth could end up looking like this, is a compelling argument to immediately quit the demon death sticks. Australia’s Graphic Health Warnings campaign also included TV, billboards and Internet ads. An evaluation of the campaign’s effectiveness was undertaken in 2008 and the “gross” mouth cancer image was of particular concern to young people, aged 15 to 24 years, in the follow-up study. If that girl in the Katy Perry song sported a nasty set of nashers like this, we’re not sure if the singer would have liked that girl-on-girl kiss quite so much!

“A memorable anti-smoking poster gets the message across without needing any copy, just a striking image to say it all. The ones in our Top 5 all have the shock value and they grab your attention straight away by using your own imagination. It’s clever advertising, simple and to the point,” says Julie Simpkins, one of the professional graphic designers at Solopress’ in-house design studio. “One I’m not so keen on, however, is the ‘Smoking Batters You Inside’ poster. The image to me doesn’t immediately show the point of the advert, copy is needed to explain the reason for the battered face. The image doesn’t seem to be as relevant.”

It’s not too late. Stub out that ciggie and stop smoking now. The Stoptober website has all the resources to help you quit smoking, including expert advice, daily motivational text messages, a smartphone app and support from other ex-smokers.