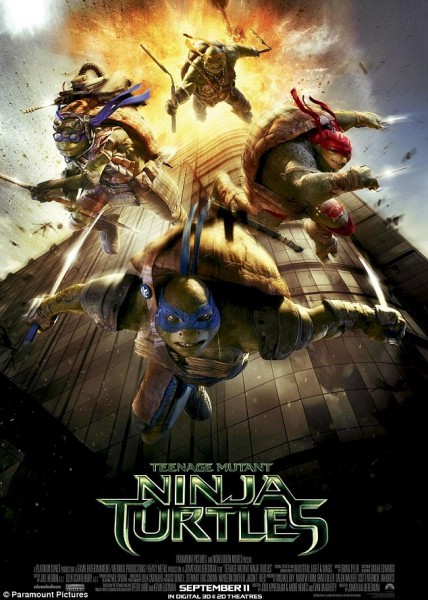 Showing the iconic heroes in a half-shell falling from a skyscraper, with a release date of September 11th slapped at the bottom of the poster, many people made the obvious connection between this fictional artwork and the tragic, real-life events that took place during New York’s terrorist attack on 9/11.

Of course, it doesn’t help matters that the four members of the pizza-lovin’ Teenage Mutant Ninja Turtles gang are supposed to live in the storm sewers of New York City itself. In other words, all the ingredients for a TV, newspaper and blogging furore were just waiting to be delivered into the hungry mouths of the world’s 24-hour news media. And it all happened faster than TMNT’s Donatello, Leonardo, Michelangelo or Raphael central characters could gulp down a slice of pepperoni ‘n’ cheese.

Quickly realising their mistake, Paramount Pictures Australia removed the poster from their Twitter and Facebook feeds, then issued this apology via an e-mail to news agency Reuters:
“We are deeply sorry to have used that artwork for the marketing materials promoting the September 11 opening in Australia. Combining that image and date was a mistake. We intended no offence and have taken immediate action to discontinue its use.”

This is yet another reminder that you really should get as many people as possible to proof your artwork before you print anything such as posters or publish it online.

On the other hand, proving the old saying that there’s no such thing as bad publicity, this poster has made worldwide headlines for a new movie that only fans of comic books and Megan Fox had heard much about before Paramount’s unfortunate Tweet.