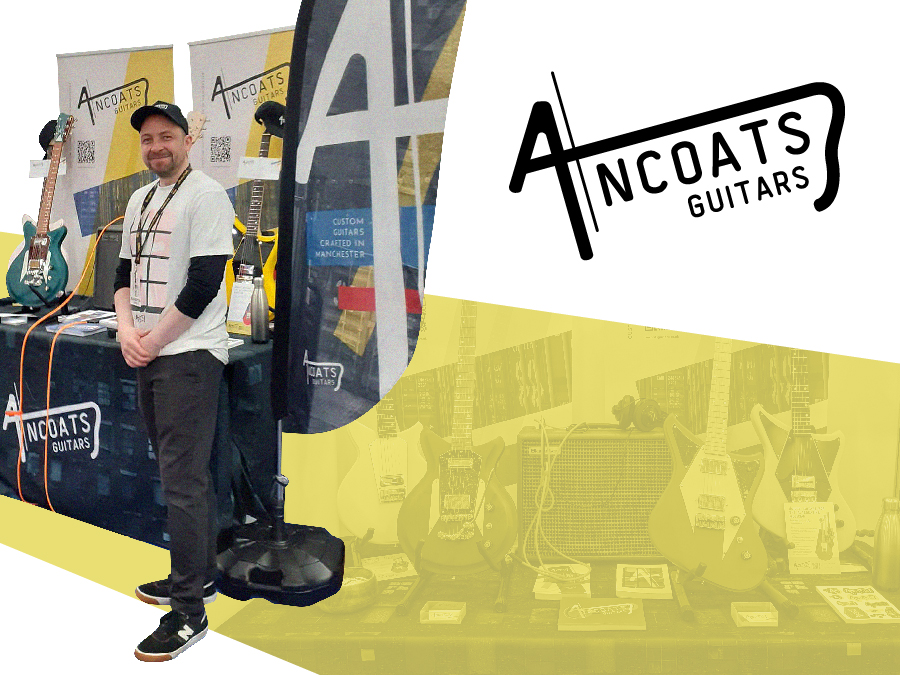 The Guitar Show in Birmingham was the second trade event where luthier Dave Roberts has had a chance to exhibit Ancoats Guitars. This time Dave was armed with a second round of printed material and merchandise to help big up his brand. We’ve been following the fortunes of Ancoats Guitars in our Start-up Stories blog series, so we were keen to see how things went at guitar show number two. We caught up with Dave to find out whether he was able to put into practice any of the trade show secrets he learned the first time around.

One thing that was different this time round was the extended range of printed material Dave had at his disposal. For his visit to the North East Guitar Show, which we covered in our previous Start Up Stories blog entry, Dave had already worked with Solopress to produce Roller Banners and a Printed Tablecloth to enhance his stand, in addition to Flyers, Business Card and Comp Slips.

Since the last event, we’d been hard at work creating new elements once again. At the North East Guitar Show, Dave found himself improvising product labels from the Comp Slips we’d produced. For a more polished solution, we were able to design and print branded Swing Tags to hang from the instruments themselves.

As promotional giveaway items, we produced A3 Posters with a stylised representation of the Ancoats Guitars logo in a contemporary block pattern design. The posters also featured a QR code so that anyone viewing them could scan the code and navigate directly to the website. 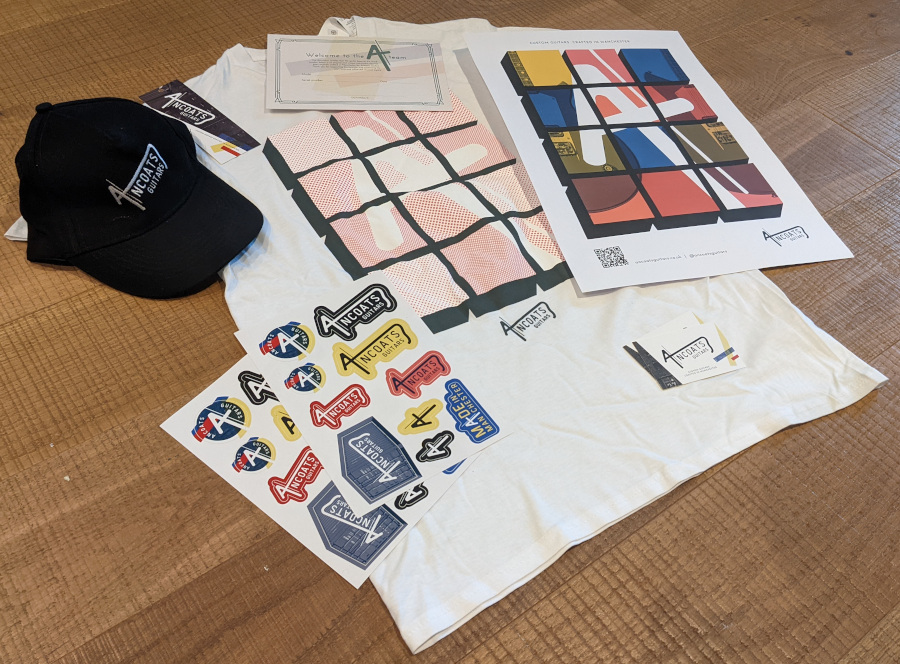 We also opted for a new product from Solopress: Custom Shape Stickers. This exciting new option makes use of our cutting-edge Motioncutter 23 machine which you can learn more about in our blog detailing our laser cutting capabilities. The sticker sheets we produced for Ancoats Guitars featured various cut out iterations of the wordmark and logo as well as a gratifyingly gritty image of Dave’s shipping container workshop, and one that proudly states ‘Made in Manchester’.

We were able to bring another speciality print finishing technique to bear when we produced certificates of authenticity for Dave to include with every purchase of an Ancoats Guitar. The use of gold foil on these certificates gives them a premium feel and adds to the unboxing experience for customers receiving their custom-built instrument. This technique serves a more practical purpose too, as foiling makes the certificate more difficult to forge.

If the cap fits

As well as paper and large format elements, we also worked together to produce printed T-shirts and embroidered Caps. The T-shirts bear a similar design to the A3 Posters, and the 6-Panel Baseball Caps are in classic black with the Ancoats Guitars wordmark embroidered in white. As well as providing a branded uniform for Dave himself as he manned the stand, they also serve as perfect prizes for social media competitions. 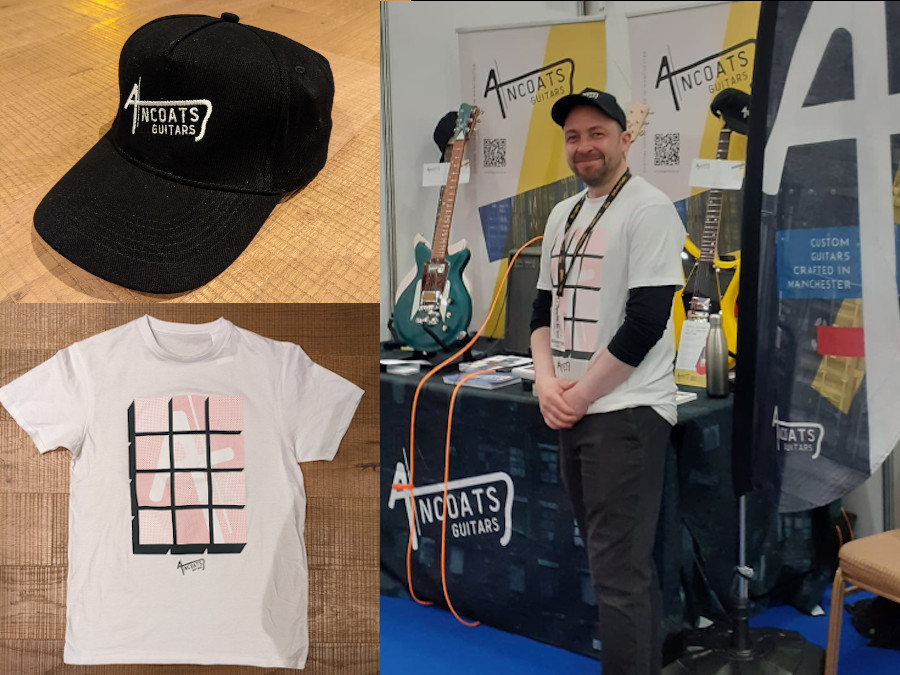 On the road again

With fresh new print and merchandise in place, it was time for Dave to pack up and head down the M6 to the New Bingley Hall in Birmingham.

The Guitar Show is the UK’s biggest event devoted to guitars, guitarists and gear. It’s organised by events company Torn and Frayed Ltd, aptly named after the Rolling Stones song of the same name. After the demise of a previous trade event called Music Live, some of the organisers saw an opportunity to create an event devoted entirely to guitars, and The Guitar Show was born.

This year’s show played host to a great variety of high-profile exhibitors. Global super brands Ibanez, Danelectro and Dunlop were in attendance, as well as the five absolute titans of UK amplification: Marshall, Laney, Orange, Ashdown and Blackstar. Innovative tech brands like Focusrite/Novation, Zoom and Eventide were showing off their latest gadgets and premium parts manufacturers like Lollar and Bare Knuckle pickups were there to offer opportunities to upgrade your instrument.

Made in the UK

As well as producers of instruments and accessories, there were exhibitors from the worlds of retail, media, publishing and music education. Increasingly significant at such events though, is the presence of online influencers. While they might not necessarily have their own stands, they made their presence felt at the show. Many well-known names like Chris Buck, Dave Simpson, Dan and Mick from That Pedal Show, and Danish Pete of Andertons TV fame were doing the rounds, meeting and greeting fans while checking out what’s new on the guitar gear scene. 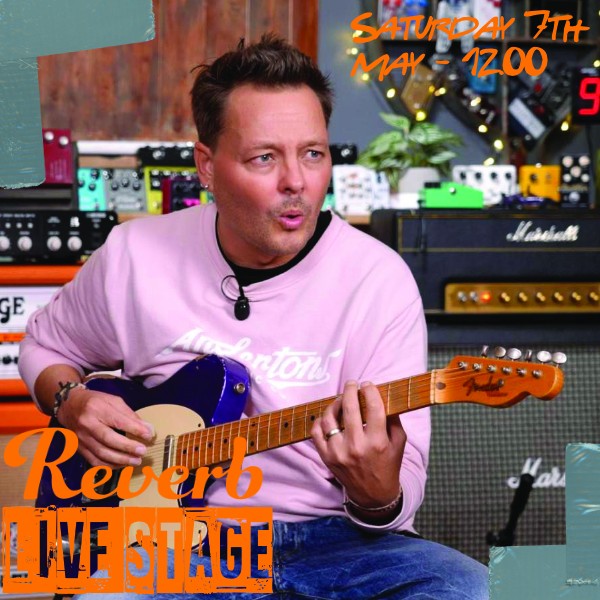 Turn up, set up, Flag up

After a very early start, Dave arrived on site in good time to set up and get ready for the day ahead. However, initial impressions of his stand’s location left Dave slightly non-plussed:

“When I located our stand, I was a bit disappointed to find it was slightly tucked away in the corner. Next time I plan to exhibit at a trade show, I will definitely pay close attention to the site map and ensure I book a stand that’s not too far off the beaten track!” 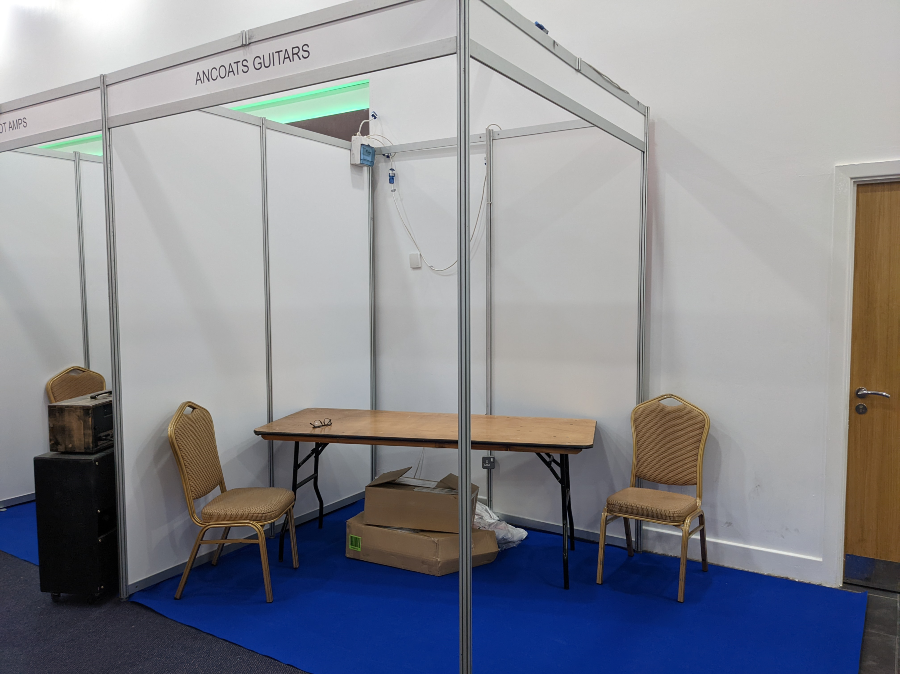 Help came in the form of the Printed Flag that we had supplied previously. Dave had taken the flag to The North East Guitar Show, but it was just too large to use at that smaller venue. Here in the New Bingley Hall though, the Flag not only looked the part, it also helped signal the presence of the Ancoats Guitars stand to visitors that might not necessarily have noticed otherwise.

Standing out from the crowd

The ensemble effect of all that Ancoats Guitars branded material was to create an impression of a company that means business. Dave felt the benefit of his pro-standard marketing collateral both in terms of attracting visitors to the stand and raising their perception of the business:

“A lot of people were surprised that I had only been going for a relatively short amount of time because the branding all looked so professional. The stickers went down particularly well. I cut some of the sheets up and had them scattered about but a lot of people were happy to get a full sheet.” 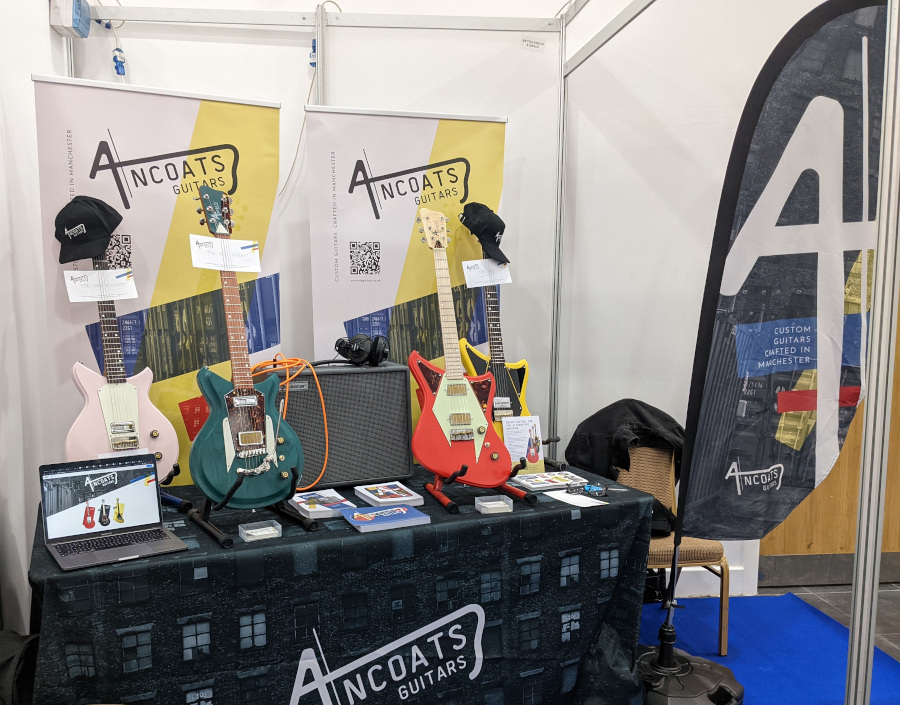 Dave had strong ideas about the branding for Ancoats Guitars long before he started working with Solopress and in-house designer Matt Bruty. His vision of a brand that defies certain norms adhered to in the guitar world seems to be paying dividends:

“I had the most colourful stand. There seems to be a trend for 50 shades of brown in guitars at the moment!”

In the busy environment of a trade show, it pays to stand out, and Ancoats Guitars’ bold and distinctive brand identity does just that. 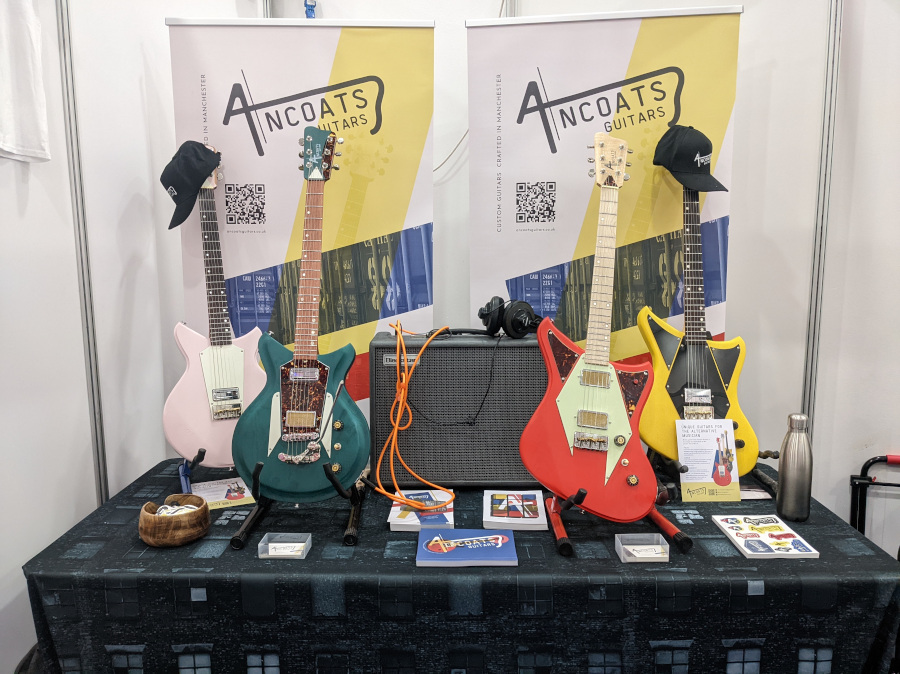 Making valuable industry contacts is an important part of the trade show experience. The live stage at the event was sponsored by Reverb.com, a well-known and highly regarded gear trading site. While Reverb built its reputation on consumer-to-consumer sales, a sort of eBay for musicians, it’s now an established retailer for brand new music gear. Procurement specialists from Reverb took a keen interest in the Ancoats Guitars stand and Dave is now in talks to sell his instruments through the site.

“I also ended up going for a drink with Matt from Fidelity, Joe from guitar nerds and the Brand Relations manager from reverb. All a bit surreal but I loved it and managed to gain lots of helpful information. Reverb are going to try and help me with international distribution.”

During the show, Dave Roberts also made a connection with popular Youtuber Dave Simpson. Dave S made a name for himself with his lo-fi, approachable attitude to discussing guitar gear. Nowadays he also makes regular guest appearances on the Andertons TV channel, broadcasting to their 770K subscribers. In a field that can feel rather elitist, Simpson is never afraid to champion affordable products and always comes across as an eminently likeable chap. 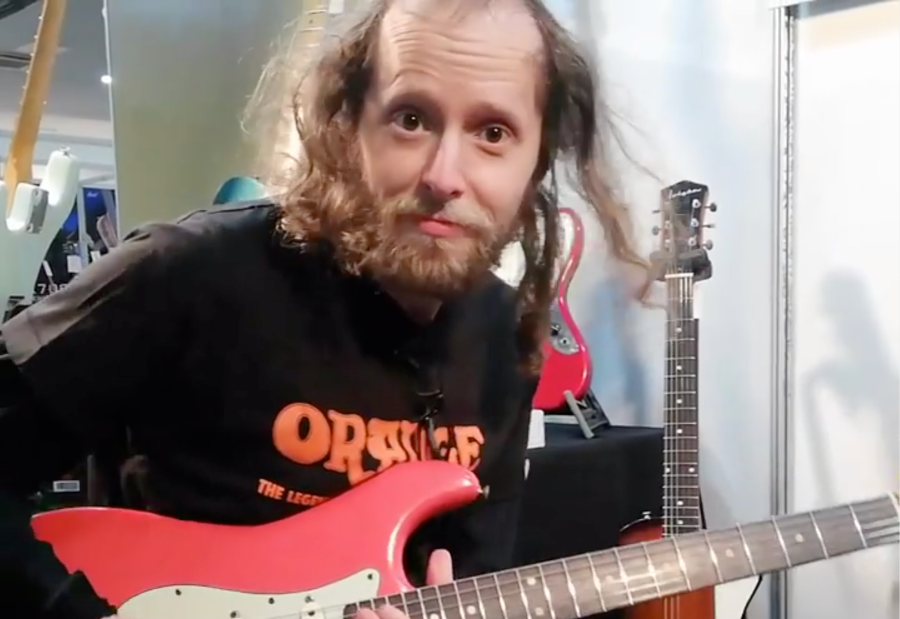 The two Daves got on famously and exchanged contact details. We hope to see Dave Simpson vlogging away with an Ancoats Guitar someday soon. Such a meeting shows that you have to be in it to win it and goes to show that getting out to these trade events and promoting yourself can yield unexpected and valuable results.

But what about sales? Dave didn’t necessarily set out to sell his instruments on the spot, yet there was good news on that front…

“Deciding on all the specifications and commissioning a custom-made instrument is a big commitment, so I remained realistic about the prospect of taking any orders at the show itself. However, I was thrilled to make a sale there and then at my stand. Not only that, but one of the visitors I spoke with has since got in touch to place an order less than a week later!”

We’re really encouraged by the way Ancoats Guitars continues to grow and establish itself within the industry after such a short time in business. These trade show appearances, along with the printed merchandise and display materials that we’ve worked on together, seem to be setting Ancoats Guitars on a successful path! 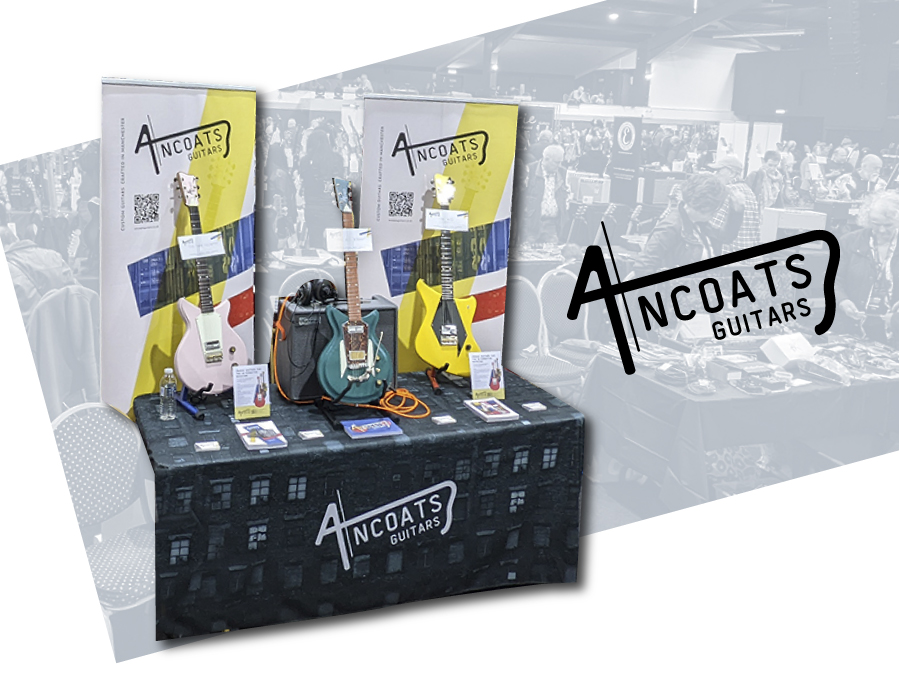 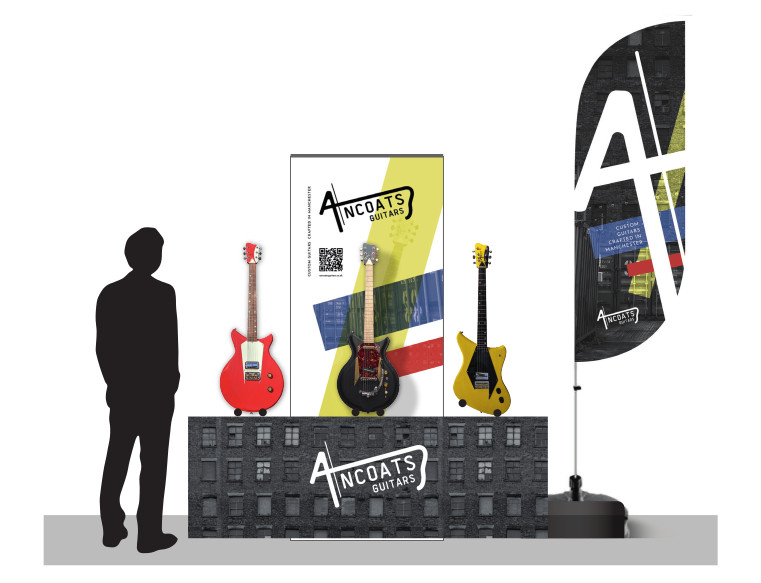 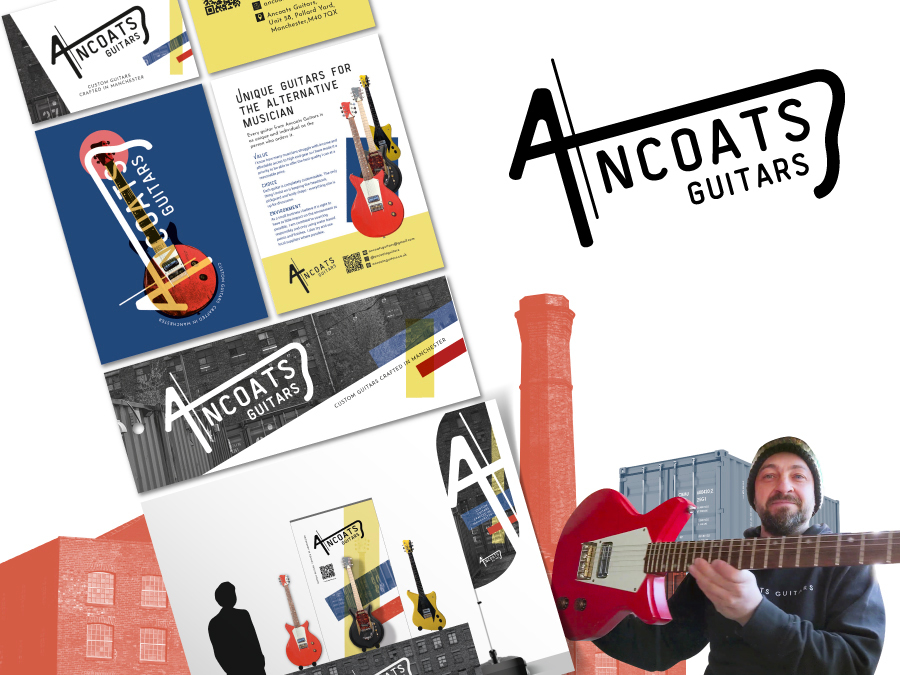