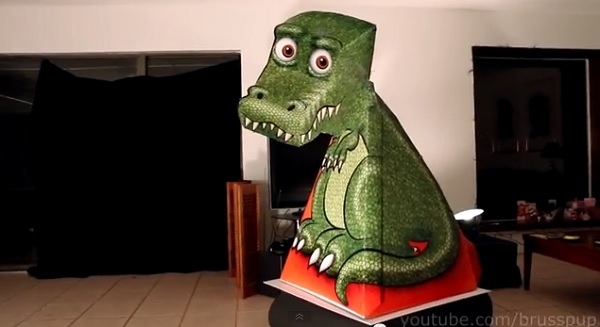 Optical illusionist Brusspup is back on YouTube with yet another amazing visual trick. This time you’ll swear this papercraft T-Rex dinosaur is looking directly at YOU!

What did you think of Brusspup’s playful piece of papercraft? It’s like this cute paper T-Rex dinosaur is actually possessed and can follow your every move around the room. Bit of a mind bender, even when you discover the video’s secret at the 1:33 mark.

Little wonder then, that this ingenious and entertaining YouTube video has already been watched by over 2.3 million people in less than 5 days.

Here’s what just a small selection of viewers have been saying about the latest Brusspup optical illusion on YouTube:

“I want one for my desk at work!” –djflatline86

“Your eyes can lie to you, don’t always trust them.” –Michael Wilson

“This video is based on the famous dragon illusion which was inspired by Jerry Andrus,” says Brusspup. “Another thing I’ve always wanted to try was to have a large version. The original file was about 9ft x 9ft. I had to split the image into four files so the printer at my local print shop could print it. I traced all of the pieces on cardboard, which I used to build a support structure for the prints. I used small pieces of cardboard and hot glue to make the structure really solid.”

“One problem that I had was that the paper for the large dinosaur was really shiny,” Brusspup adds. “So if you look closely you can see the reflection of the eyes on the ‘top’ and side panels. I bought some matte spray to try and minimise the reflections. It worked a little. Over all I was happy with the results.”

Brussup has also created lots of other incredible optical illusions on his popular YouTube channel, including: