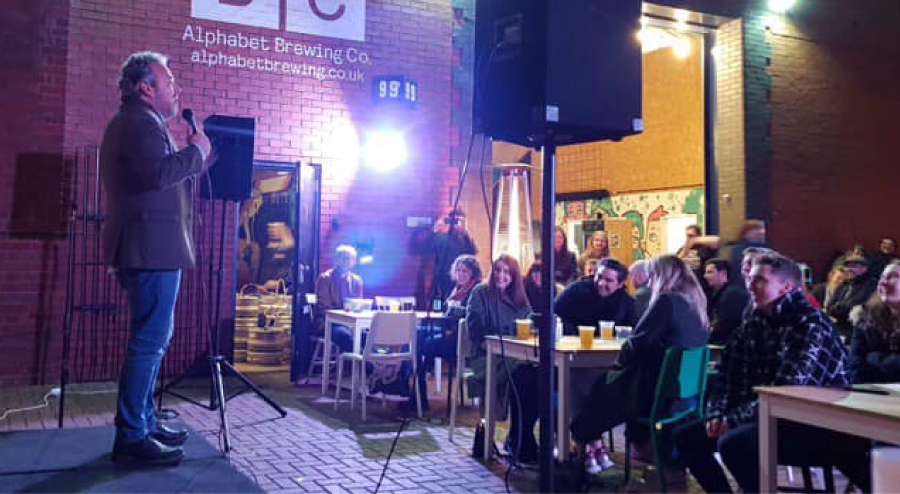 Nodding Dog Comedy is a promoter of live stand-up shows and events in the North West of England. Officially it has been up and running as a business for just two years, but Nodding Dog Comedy has been around in one form or another for around 15 years, since founder Kev Rook was on the stand-up comedy circuit himself.

After Kev was given the opportunity to promote a couple of shows locally, he realised there was a gap in the market for a specialist comedy promoter. He made the decision at that point to dedicate himself full time to transforming Nodding Dog Comedy into a bona fide live comedy events company operating throughout Manchester, Cheshire, Lancashire & Cumbria.

Not one to take the conventional route, Kev decided he wanted to do things a little bit differently. As you’d expect, Nodding Dog Comedy works with venues to stage one-off comedy nights, regular clubs, corporate events, and even comedy festivals. Where Nodding Dog Comedy put’s its own playful paw-print on proceedings is in the formats of the nights they run. 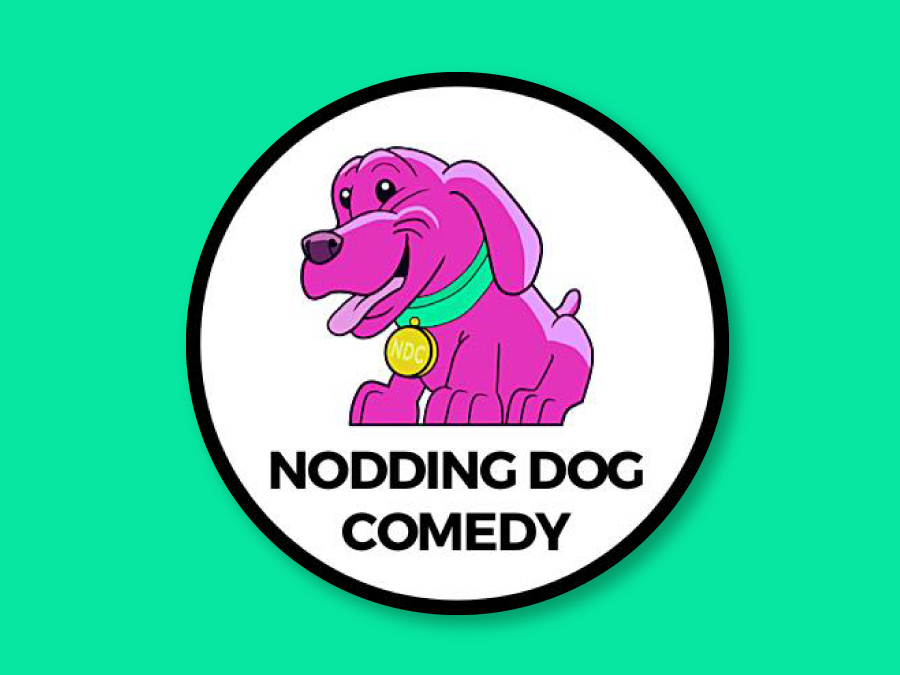 Many of their regular shows are built around off-beat and experimental themes. A new variety night they’re launching in a gin bar will feature a live jazz band that gets involved with the acts as the show goes on. Another of their regular nights prohibits acts from performing their usual genre of comedy, producing rare, one-off performances from the comedians involved!

Another point of difference for Nodding Dog is their love for a quirky venue. While Kev has a huge affection for what he describes as the “spit and sawdust venues” that are the mainstays of the comedy circuit, he also believes in delivering world-class comedy in places you wouldn’t expect to find it.

Comedy where you least expect it

Kev has a particular fondness for spaces that might not traditionally host comedy. He always has an eye out for places that bring something a bit special to the party. That could be a brewery, a city centre night club, a sports venue, a bowling green, or even a sprawling country estate!

When staging a more traditional night of stand-up, Kev is sure to book the very best quality acts around. In the last year alone, high-profile, as-seen-on-TV names such as Russell Kane, Hal Cruttenden and Jo Caulfield have all stepped onto the stage at events promoted by Nodding Dog Comedy. 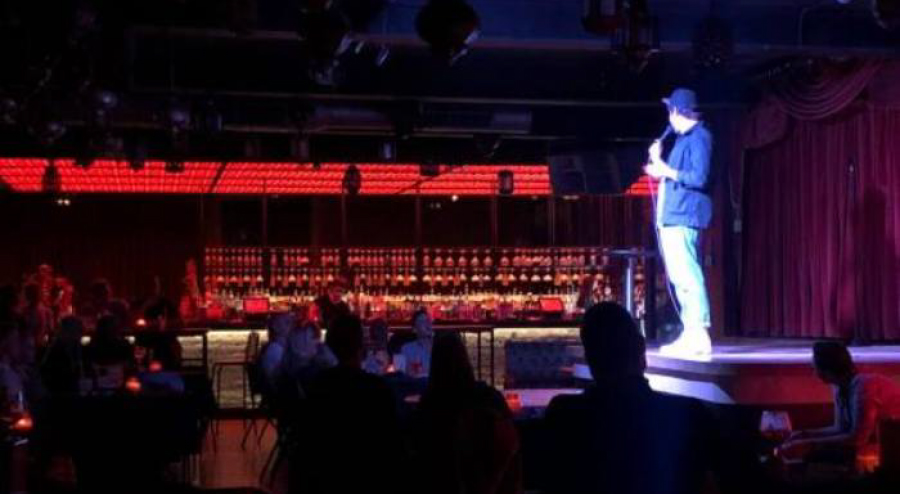 The company supports new acts as well, with a regular night showcasing rising stars of the stand-up circuit. No strangers to the digital realm, Nodding Dog Comedy also hosts a podcast and streams live comedy events, which you can keep up to date with by following @noddogcomedy on Twitter.

“The great thing about this job is that it’s fun. You know, you’re arranging and promoting comedy gigs with some of the best comedians in the country – it’s immediately more exciting than being an accountant!” Kev Rook, Nodding Dog Comedy.

Without a doubt, the pandemic made things tough. Like a lot of creative people, Kev has embraced the challenge of finding new ways to move forward. Last year, he still managed to put on 40 COVID-compliant shows, making Nodding Dog Comedy one of the most active promoters in the UK. 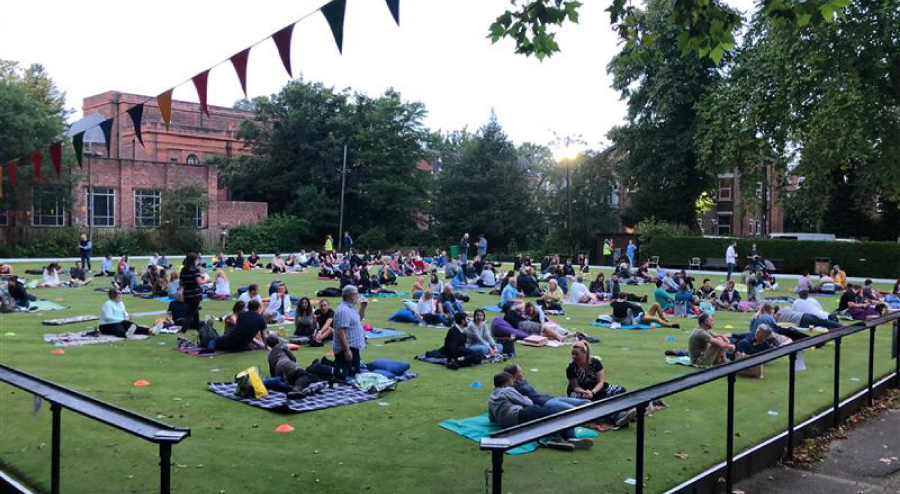 In addition to finding creative solutions to keep the live work going, Kev was well placed to exploit online opportunities. As well as being fanatical about comedy, Kev describes himself as a “design, digital marketing and social media geek.” This has stood him in good stead when finding ways to shift operations into the online world.

Nodding Dog Comedy’s first experience using Solopress was a bittersweet occasion. We printed 5,000 brochures and a bumper supply of posters to promote the West Didsbury Comedy Festival, but sadly the festival was not able to go ahead.

On a brighter note, the West Didsbury Comedy Festival has been rescheduled for October 2021, and Kev has been delighted with the service and quality he receives from Solopress:

“What I liked was the reassurance that the print and design was all as it should be right from the start of the process. It is both the most exciting and scariest thing in the world to open boxes while praying that the print quality will be up to expectations. We’ve had nightmares with other companies in the past with the print not matching the samples or just poor quality. We needn’t have worried with Solopress – it’s safe to say we’re using them for everything going forwards.” Kev Rook, Nodding Dog Comedy

Following on from Posters, Flyers and Brochures, we have plans to work with Kev on a whole kit of promotional materials, including Beer Mats, Banners and T-Shirts. We’re also excited about looking into using one of our Exhibition Stands as a backdrop on stage!

A nod to the future

As for what the future holds, Kev’s plan is to keep on expanding. The target for 2022 to launch 15 new venues and for a second comedy festival. In fact, festivals is an area where Kev has some serious ambition. His vision is for an on-site weekend event with camping and beer and food tents, which he hopes to stage somewhere in the UK in 2023.

In the long term, Kev would love to open a Nodding Dog Comedy club:

“One day in the future we’d love to get the dog a home and have our own venue. We’re picturing a craft brewery and burger kitchen on-site – hey you have to dream big!” Kev Rook, Nodding Dog Comedy

Nodding Dog Comedy is an energetic and resourceful company with an exciting couple of years in front of them. We’re thrilled to be part of their story, and wish them the best of luck for the future. We strongly recommend you keep an eye on them too, by checking out TheNoddingDogComedy.com and following them on Facebook, Twitter and Instagram. 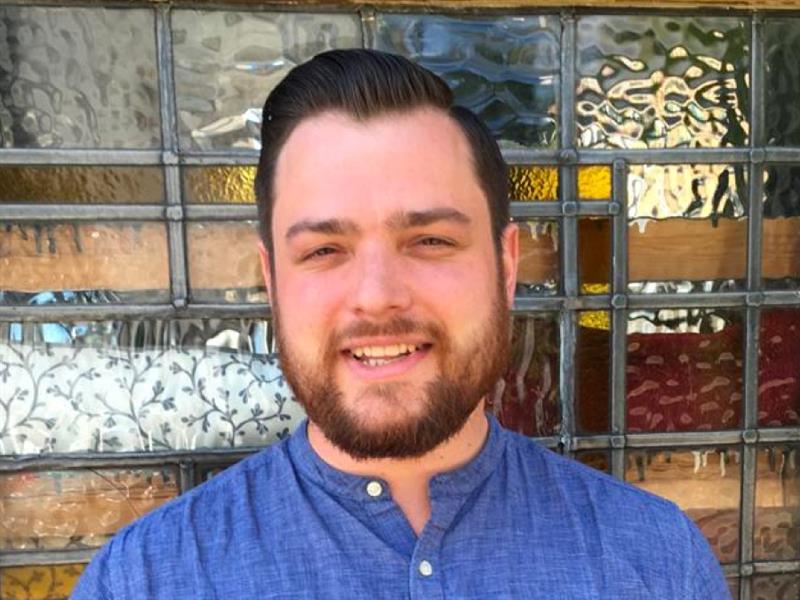 Customer Stories: Out of the Smoke by Matthew Wainwright 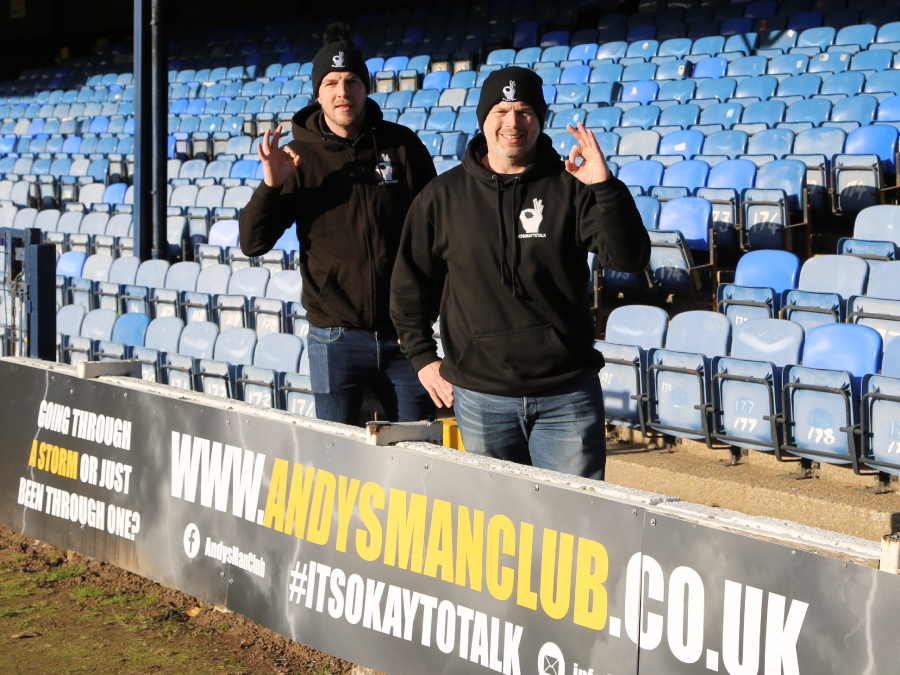